What the f*ck is going on with the FBI and the Justice Department?

This situation has gone from embarrassing to criminally incompetent.

After screwing up the investigation of the Orlando shooter, the FBI now appears to have lost track of his likely-accomplice wife.

Attorney General Loretta Lynch admitted today that the FBI is unaware of the whereabouts of Omar Mateen's wife, Noor Salman.   This is outrageous.  She is at best a material witness in a mass shooting.  Worst case,  she is an accomplice.

And they LOST HER.

How does this happen?  Are there any adults in charge anymore?

This is a staggering display of incompetence.

This comes after the FBI seems to have screwed up the investigation into this jihadi in the first place.

The FBI was informed on no less than 3 separate occasions that Mateen was a potential risk.   Twice they investigated and found nothing.  Once they didn't even bother to look.

And it gets worse.  It appears that this is not the spur of the moment actions of a lone wolf.  This appears to be a terrorist conspiracy. 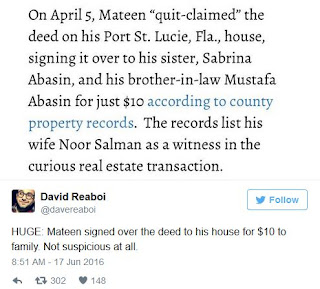 Mateen gave away his house to his sister for $10 just a few months ago.  His wife was a witness to the transaction.   Why would you sign away the rights to your home for $10?  Because you knew you wouldn't need it much longer, that's why.   And the wife knew about it.   She is an accomplice.  And the sister and brother in law are likely accomplices as well.


These people should be in jail.  They are clearly implicated in this crime.

Why won't the FBI follow the very wide and clear trail of evidence?  Why are they allowing reporters to trample all over the crime scene?  Why are they not keeping track of witnesses and accomplices?

Can this be explained by sheer incompetence?  It seems unlikely that the entire FBI can be this stupid and irresponsible.

Perhaps the Obama administration doesn't want the FBI to find out that his whole family knew this was coming.   Because if the American public knew that the this was a conspiracy of an entire group of Muslims, the entire narrative of the 'lone wolf gun nut' falls apart.