The Inmates are Running the Asylum

Loretta Lynch, the highest law enforcement officer in the land, is officially out of her mind.

She has completely left the realm of rational thought and discourse with her latest pronouncement on the Orlando attacks. 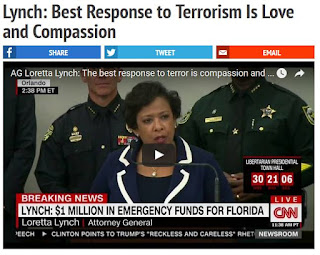 Lynch said the Department of Justice stood in solidarity with the LGBT community “in the light” following a Muslim terrorist’s massacre of 49 people at a gay nightclub last week.

“We stand with you to say that the good in this world far outweighs the evil, that our common humanity transcends our differences, and that our most effective response to terror and to hatred is compassion, it’s unity, and it’s love,” Lynch said. “We stand with you today as we grieve together, and long after the cameras are gone, we will continue to stand with you as we grow together in commitment, in solidarity, and in equality.”


What kind of hippie dippy, New Age bull crap is this? She is responsible for our national defense against terror, and she thinks the best response is compassion and love???

If this is the attitude of the Obama administration, it is no wonder that we are losing the War on Terror.
Posted by Kaffeesatz at 9:12 AM