We have reached the Poe Horizon, where it is impossible to tell parody from actual delusional ideas.


With apologies to Monty Python, a parody conversation between a Jihadist and a Liberal apologist:

“We did this because our holy texts exhort us to do it.”
“No you didn’t.”
“Wait, what? Yes we did…”
“No, this has nothing to do with religion. You guys are just using religion as a front for social and geopolitical reasons.”
“WHAT!? Did you even read our official statement? We give explicit Quranic justification. This is jihad, a holy crusade against pagans, blasphemers, and disbelievers.”
“No, this is definitely not a Muslim thing. You guys are not true Muslims, and you defame a great religion by saying so.”
“Huh!? Who are you to tell us we’re not true Muslims!? Islam is literally at the core of everything we do, and we have implemented the truest most literal and honest interpretation of its founding texts. It is our very reason for being.”
“Nope. We created you. We installed a social and economic system that alienates and disenfranchises you, and that’s why you did this. We’re sorry.”
“What? Why are you apologizing? We just slaughtered you mercilessly in the streets. We targeted unwitting civilians — disenfranchisement doesn’t even enter into it!”
“Listen, it’s our fault. We don’t blame you for feeling unwelcome and lashing out.”
“Seriously, stop taking credit for this! We worked really hard to pull this off, and we’re not going to let you take it away from us.”
“No, we nourished your extremism. We accept full blame.”
“OMG, how many people do we have to kill around here to finally get our message across?” 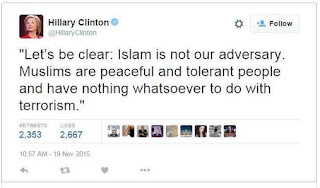 Now, the actual statements of the presumptive nominee of the Democratic Party:  Muslims are tolerant people and have nothing whatsoever to do with terrorism.

This is incredibly frustrating.

They now have to issue guidelines to their killers to avoid targets that make it easier for the US government to take the blame for the attack.

As is noted in the latest ISIS guidelines:

Most of the individuals present at pulse nightclub were Latino. We recommend — And Allah knows best — that it is better to avoid targeting places and crowds where minorities are generally found in America. knowingly that the federal government will be the one taking full responsibility. Therefore we advise targeting areas where the Anglo-Saxon community is generally concentrated. This class of the American community is the majority and it is the one that is in the American leadership.

We have reached the Poe Horizon, where it is impossible to tell parody from actual events.