Everything You Need to Know About Gun Control

The Democrats are currently staging a 'sit in' on the floor of the House of Representatives until they get a vote on certain gun control measures. 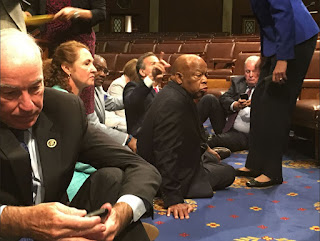 This is pure political theater.  The Democrats are not serious about enacting gun control.   They are simply trying to use this issue to gain political leverage and publicity.

How do we know this?

The Democrats controlled the House and the Senate and the Presidency with veto and filibuster proof majorities for 4 months during Obama's first term, and near super majorities for the entire first two years.

If the Democrats really believed in gun control, they could have passed it, just like they did with the Affordable Care Act, without a single Republican vote.    They did nothing.

Democrats are not serious about gun control. This is all just political theater designed to increase their power and control.