When the news of the shooting at an Orlando night club broke, there was a lot of media speculation on who could be behind this horrible attack and what their motives might be.


The media speculated that it was a right wing religious nut job motivated by anti gay animus and homophobia. 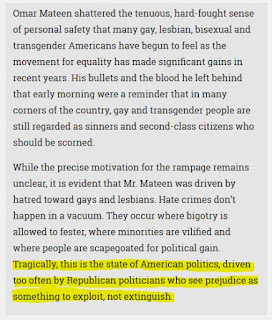 The Left wing victim hood narrative was about to kick into gear and blame nasty conservatives and Republicans for this crime.

Then the facts came out.

The identity of shooter and his motivation are now crystal clear.  We know this because he called 911 and a local news station to announce his motivation.

He is a Muslim. He is a registered Democrat. He committed this crime as a supporter ISIS.  He wanted to kill gays because he was offended by them kissing in public.

Naturally, the media reacted to this news by placing the blame for this on.... Conservative Republicans.

That's right, you see.  Christian Republicans have created such a toxic anti gay environment that it is forcing Muslim Democrats to shoot up gay night clubs.  An environment so toxic, in fact, that the shooter is even confused about whom to credit for his inspiration.

George Orwell, call your office.
Posted by Kaffeesatz at 8:33 PM