I am sure you have seen the media trying to make the Occupy protests seem just like the Tea Party protests. They keep pointing out the common ground, namely the anger over government bailouts and crony capitalism.

There is even a handy chart floating around showing the overlap between the movements. But this chart is missing some key information, namely, what other things each of the two groups are all about.

Here is an updated version! 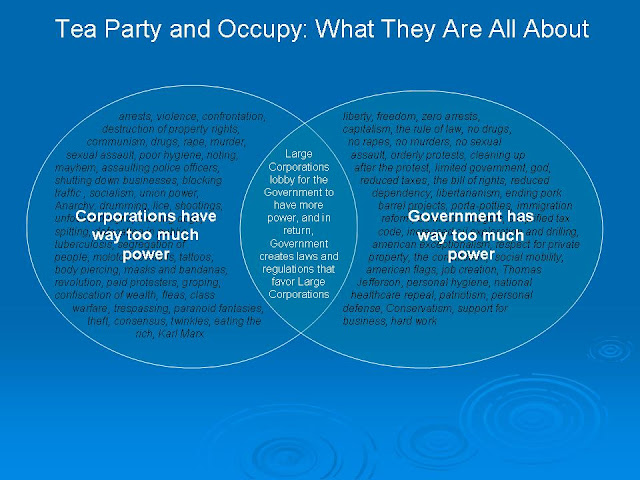 Posted by Kaffeesatz at 1:09 PM No comments: 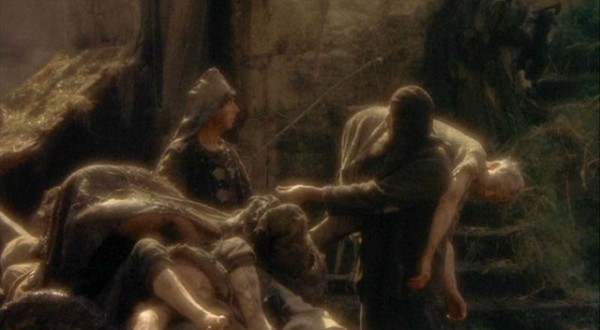 Posted by Kaffeesatz at 10:03 AM No comments:

A few days ago I pointed out that the OWS nincompoops were advocating the destruction of Western Civilization, all while re-creating the same rules and structures within their slovenly encampment. 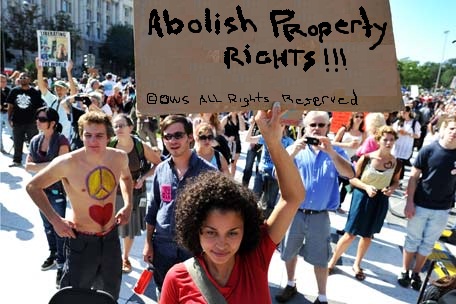 It seems that they have come a long way in just a few days.

They have filed for a Trademark on the words Occupy Wall Street, and are planning to design, manufacture, and sell t-shirts and other branded merchandise.

Now we will be treated to the spectacle of a T-shirt that reads "Abolish Property Rights!  (c)OWS 2011, All Rights Reserved!
Posted by Kaffeesatz at 2:16 PM No comments:

In an effort to spread fear and panic, the recent early snow storm on the east coast is being blamed on Global Warming....except the article itself plainly states that the "The snow-bearing Nor'easter cannot be blamed on climate change ".

Notice that the headline and the first paragraph -- global warming caused the early snow -- are NOT supported by the article that follows.  This is pure proaganda designed to suck in the gulible and propagate the myth of AGW.

WASHINGTON (AP) — Freakish weather disasters — from the sudden October snowstorm in the Northeast U.S. to the record floods in Thailand — are striking more often. And global warming is likely to spawn more similar weather extremes at a huge cost, says a draft summary of an international climate report obtained by The Associated Press.
.....
The snow-bearing Nor'easter cannot be blamed on climate change and probably isn't the type of storm that will increase with global warming, four meteorologists and climate scientists said. They agree more study is needed.


Note that the article contradicts itself with a few paragraphs.  And, of course, the phrase "more study is needed" translates to 'give us more money'.


The next paragraph gives the game away:

This marks a change in climate science from focusing on subtle changes in daily average temperatures to concentrating on the harder-to-analyze freak events that grab headlines, cause economic damage and kill people.

They are admitting here that they are engaging is sensationalism.  "Harder-to-analyze" means 'unrelated to global warming, and "grab headlines" means 'allows us to sucker in the stupid and gulible with sensational headlines'.  So the 'science' phase of AGW is over, and the 'propaganda and panic mongering' phase begins.

The opposite kind of disaster — the drought in Texas and the Southwest U.S. — is also the type of event scientists are saying will happen more often as the world warms, said Schmidt and Meehl, who reviewed part of the climate panel report. No studies have specifically tied global warming to the drought, but it is consistent with computer models that indicate current climate trends will worsen existing droughts, Meehl said.

See?  Global warming causes everything.  Rain and Not Rain!  It is magic!

And again we see blatant contradiction in the same paragraph.  Drought is caused by global warming, but "No studies have specifically tied global warming to the drought".  Which is it?  Droughts are caused by AGW or not??

In fact, the report says that "for some climate extremes in many regions, the main driver for future increases in losses will be socioeconomic in nature" rather than greenhouse gases.
...

The driver for increased losses will be 'socioeconomic'? Oh, I see.  In the future there will be more people and more stuff to be destroyed, so when a storm hits, the losses will be higher solely because of that, and not the much ballyhooed 'greenhouse effect.  In other words, AGW is hogwash, but everytime a storm hits the warmists will shout 'record losses!' and 'record deaths', conveniently forgetting to mention that more people live in the way of the storms.


The report does say scientists are "virtually certain" — 99 percent — that the world will have more extreme spells of heat and fewer of cold. Heat waves could peak as much as 5 degrees hotter by mid-century and even 9 degrees hotter by the end of the century.

Oh, really?  99 percent certain?  Then these fine folks will surely resign in disgrace when this does not happen, just like every other predicition they have made over the past 30 years?? Notice, by the way, that they have stopped making 20-30 year predictions of doom, since the keep on getting disproven every 20-30 years.  Now the planning horizon is 50-100 years.  This way they can all be safely dead before the enbarrassing facts become known.

But Masters said the basics of the report seem to be proven true by what's happening every day. "In the U.S., this has been the weirdest weather year we've had for my 30 years, hands down. Certainly this October snowstorm fits in with it."

There is zero evidence for this claim.  What is the definition of 'weirder weather'? Other than this unsupported assertion, are there any actual facts here??  And again, this claim that "this October snowstorm fits in with it" is FALSE, it having been clearly stated at the start of the whole article that "The snow-bearing Nor'easter cannot be blamed on climate change ".

It seems like we are flogging a dead unicorn here, but Global Warming is NOT REAL.  Get over it.


And global warming isn't the sole villain in future climate disasters, the climate report says. An even bigger problem will be the number of people — especially the poor — who live in harm's way.
Posted by Kaffeesatz at 10:45 AM No comments: