Boeing corporation is in the midst of a labor negotiation with the unions, and they seem to have reached an impasse.

Never fear, a solution is at hand!!

Newly elected Seattle councilman Kashma Sawant has exhorted the workers to seize the means of production. 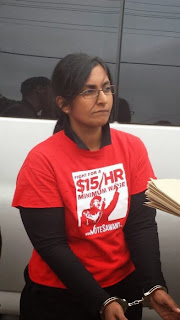 Sawant is calling for machinists to literally take-possession of the Everett airplane-building factory, if Boeing moves out. She calls that "democratic ownership."

“We can re-tool the machines to produce mass transit like buses, instead of destructive, you know, war machines,” she told KIRO 7.

They will sell products designed by whom?  With raw materials delivered on time by whom?  The contracts will be written and executed by whom?

Look, I am not a fan of lawyers, purchasing agents and Human Resources, but you will need them to do business in the modern world.

The workers a Caterpillar learned the hard way during the 1990's who really needs whom.  They went out on strike and the managers came in an ran the plants themselves.  The results?  Costs went down, quality went up. and Caterpillar posted record profits.  It was huge disaster for the unions and it was very clear that the executives need the worker far less than the workers need the executives.

I don't expect the socialist politicians to understand the real world.. After all, they don't have to live in it.

But factory workers need to get a clue.

Running a business is not easy and the workers are far better off under Capitalism than any other economic system.

Posted by Kaffeesatz at 2:19 PM No comments: