There are a number of people complaining that the recent mass shooting was done with a
legally purchased AR-15, and that people on the terror Watch List should not be allowed to have guns. Presumably, they think this would have prevented this tragedy from occurring. 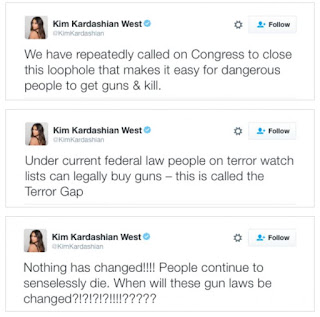 Noted legal expert Kim Kardashian and other scholars have weighed in on the topic through such thoughtful mediums as Twitter and FaceBook, proclaiming that we need to do something to prevent such carnage in the future.

Apparently the idea is to cross reference the Terror Watch List and/or the No Fly List with the current background check database so that people on 'the list' would be enjoined from purchasing firearms.

There are several problems with this approach.

1.   These lists are secret government lists for which there is no transparency for how a name gets added or deleted from the list.  There is no oversight, control, or appeal.    Effectively, it would be a secret, non-judicial process for stripping rights from people the government doesn't like.   Even the most trusting-of-government-souls on the planet should be a little apprehensive about signing away fundamental rights to a secret bureaucratic list.

2.  The shooters in the most recent terror attacks weren't on the list in the first place.  Even if this law had been in place, it would not have prevented any of these attacks.  The shooter in the Orlando shooting was interviewed by the FBI on multiple occasions and was cleared.  HE WAS NOT ON THE LIST!!  The San Bernadino shooter was not on the list either.

3.  Actual known terrorists won't be on the list either.  If the FBI is actively investigating someone for possible ties to Islamic Jihad, the last thing they will do is potentially tip off their quarry that they are being watched by adding them to the watch list.   If the FBI had a mole inside a terror ring and suddenly every member of the cell is suddenly on the No Fly List, the entire operation will be blown.  They won't be adding real terrorist to the list, so it won't help here.

There are few things more ripe for abuse than a secret list maintained by the government for purposes of oppressing people the government does not like.  Given the overt politicization of the IRS, how long do you think it takes before the Justice Department caves in to pressure from the Left and adds every member of every organization named as a terror group by the Southern Poverty Law Center to the list?   Pretty soon such groups as the Singing Nuns will not be able to purchase guns.