The War on Reality


The Left has now fully divorced itself from reality.  Socialists and other assorted left wing idiots have always had a rather casual relationship with the truth, but now they have gone full bat shit crazy.  They deny basic reality in order to keep the narrative alive.

The latest proof?   They claim that we 'may never know' the motive of the Orlando terrorist.

Let's do a reality check here: 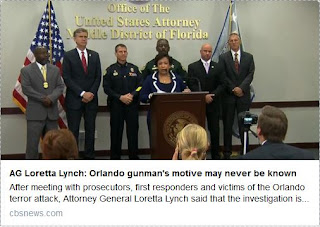 But... we may never know what motivated Mateen according to Loretta Lynch, the highest law enforcement officer in the land.

We may never know, says the Guardian.

We may never know, says the New York Times.

Really?  We may never know?

It seems pretty clear what his motivation was -- he was inspired by Islam and Jihad.

He said so himself, and every fact in the case points to that reality.

But the Left has to deny this reality, because the truth is damaging to their narrative and their world view.

This is not the first time the Left has trotted out the 'we may never know' what happened trope.  After the Ferguson incident had been fully revealed and all the fact were in exonerating the officer and backing up his story, Obama still claimed "We may never know what happened.."

The Left claims that Islam has nothing to do with terrorism, and it is only because we are provoking these lovers of the Religion of Peace that they are lashing out at us.

So maybe Islam is not the Religion of Peace after all.  Maybe the Left is living a lie.

Maybe the Left is at war with reality itself.