To Trump or Not to Trump?

Donald Trump is now the presumptive nominee of the Republican Party for the 2016 election cycle.

There has been a lot of conversation about his candidacy -- ranging from the insightful to the absurd.   He seems to be a truly polarizing man, who soars higher in the polls every time the media attacks him.

Some of the anti-Trump arguments are interesting as well.   He is not a conservative, he is a megalomaniacal opportunist and con man that will destroy the brand of the Republican party and quite possibly the country. 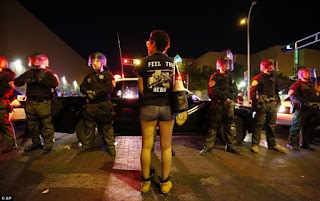 But perhaps the single most persuasive argument in favor of Trump is this:  Look at how the Left is losing its mind over his candidacy.  There have been violent protests in Chicago and other places that have often led to campaign events being cancelled.

The Left says nothing about Kasich or Jeb!.  It verbally attacks Cruz, smearing him with insane conspiracy theories about the Zodiac Killer and entanglement with the JFK assassination.
Trump, however, brings them out in the streets, rioting, screaming, and attacking people.

The Left truly hates Trump.  They hate him with a passion that is not equaled by their disdain for all the other Republican candidates combined.

Hate is based in fear, and it is clear that the Left fears a Trump presidency.

The pure animal hatred of Trump is his strongest endorsement.