The media has lost all objectivity and now routinely engages in partisan attacks masquerading as journalism. 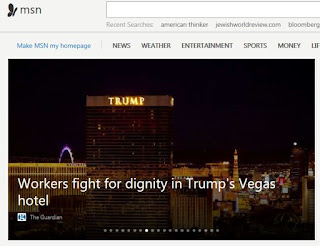 The latest example is this 'news item" from MSNBC.    The headline "Workers fight for dignity in Trump's Las Vegas hotel" tells you everything you need to know.

Dignity?  Dignity comes from within.  It is defined by Webster as

the quality of being worthy of honor or respect
These are behaviors that individuals control -- it has nothing to do with Trump or his hotel.
The misuse of the term dignity here is meant to imply that somehow Trump is not treating people with respect.   The article lists a number of alleged instances where Trump is not treating his workers well, including the fact that the cleaning staff is not allowed to talk to The Donald or his family.
The Horror!  Because the cleaning staff are routinely encouraged to chat it up with guests and the management team at other hotels.  Actually, no.  They are not.  They are there to clean, not to make friends with the guests.
The article goes on to list a number of alleged wrongs that this illegal immigrant family is suffering, such as the fact that the father is currently in jail for a DUI.  How any of this is related to Trump is a mystery.
This is not journalism, it is a libelous smear campaign.
Posted by Kaffeesatz at 11:33 AM