When people are employed to clean up HazMat sites left in the wake of another Obama debacle, do these count as ‘green jobs’??

The Obama administration funded Solyndra to the tune of $500MM in taxpayer funds.  It promptly went belly up, leaving behind a giant mess and a half a billion dollar hole in our pockets.

The also left behind a huge HazMat site:

MILPITAS (CBS 5) — Three months ago, CBS 5 caught Solyndra tossing millions of dollars worth of brand new glass tubes used to make solar panels. Now the bankrupt solar firm, once touted as a symbol of green technology, may be trying to abandon toxic waste. . . .

CBS 5 found the building locked up, with no one around. At the back, a hazardous storage area was found. There were discarded buckets half filled with liquids and barrels labeled “hazardous waste.”
The building’s owner, a company called iStar, claimed in court documents, “there may be serious environmental, health and safety issues” at the premises. According to the documents, they include, “numerous containers of solvents and chemicals. . . and processing equipment contaminated with lead.”


This exposes a few things that the Left would rather not let you see: 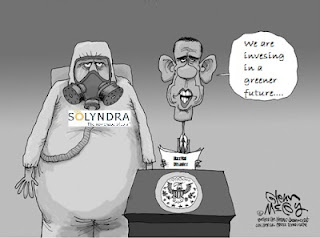 Green Technology Ain't So Green:  The Left likes to tout solar and wind as the 'energy of future' that does little or no damage to the environment.  We already know that wind power is useless because power companies cannot rely upon it and have to keep an equivalent amount of carbon-based generation running at all times to make up for the variability of output.  Plus the blades of the wind turbines mince up a few hundred thousand birds every year, including raptors on the endangered species list.  This is a net-negative to the environment no matter how you slice it.... (what, too soon?)

Solar panels are supposed to be benign, passive devices that reduce our impact on the planet. Now we see that the processes used to manufacture them are soaked in hazardous chemicals. So much for being green.

Green Jobs Are a Myth:  We 'invested' $500MM in Solyndra which went bankrupt less than 2 years later.  It created a few thousand 'green jobs' for a few months before the fraudulent business model doomed the enterprise.  It would have been cheaper just have given each employee a few hundred thousand and told them to take the year off.  We would be $250MM ahead, and without a giant mess to clean up.

Government can Invest Wisely: It should be obvious by now that private investors jump on all the 'good' ideas early.  Many of these ventures go broke anyway.   By the time Solyndra came begging at the public trough they had already been turned down by every private venture fund and every bank.   There was a reason that no one would fund it: It was a bad idea.  The business model for Solyndra was broken, new technology had superseded it.  It was doomed to fail and no rational investor would touch it.   But that did not stop the Obama administration from pouring a half billion down that sewer.  It is easy to bet wrongly when you are betting other people's money.

Political investment with other people's money will NEVER work.


Green People Ain't So Green:  The executives Solyndra were on a crusade to free mankind from the shackles of carbon based energy.  They would sacrifice everything and stop at nothing to make the planet a little greener.  Unless, of course, they were going to lose some money. Then they don't have quite as much environmental fervor.

Team Obama set up the loans so that the equity investors got paid back first (unheard of in non-fraudulent loans, by the way).  Now that the 'green investors' might have to pay to clean up the HazMat mess they left behind, they run away screaming like selfish children that they should not be held accountable.

It seems their devotion to the planet is closely aligned with their personal financial interests. If they can be 'green' in a get rich quick scheme, they are all in.  But the moment that they might lose money, they run for the exits, leaving the taxpayers to foot the bill.

Posted by Kaffeesatz at 9:53 AM