Destruction of the Country, Obama Style


There have been rivers of cyber ink spilled discussing Obama's apparent campaign to destroy the country. Most of it has really been a discussion of opposing philosophies. Socialism against Capitalism. Progressivism opposed to Conservatism.

It has been easy to view many of the things he has done as destructive, even anti-American.
But there has been little evidence of a naked assault on the core values of the country.
Until now.
He is launching a direct assault on the separation of powers and the very foundations our Republic.
The Supreme Court is poised to undo the crowning achievement of his administration: Obamacare. Rather than accept the fact the Constitution does not permit the Federal government to wield such powers, he and is allies in the media and the congress have launched an unprecedented assault on the court.
PRESIDENT OBAMA: So there is not only an economic element and a legal element to this, but there is a human element to this, and I hope that is not forgotten in this political debate. Ultimately, I am confident the Supreme Court will not take what would be an unprecedented, extraordinary step of overturning a law that was passed by a strong majority of a Democratically-elected Congress. I just remind conservative commentators that for years we have heard the biggest problem on the bench was judicial activism or a lack of judicial restraint. That an unelected group of people would somehow return or overturn a duly constituted and passed law. Here’s a pretty good example. Well, I am confident that this court will recognize that and not take that step. As I said, we are confident this will be over, this will be upheld. As I said, we are confident this will be upheld because it should be upheld. Again, that’s not just my opinion. That’s the opinion of a whole lot of constitutional law professors and academics and judges and lawyers who have examined this law, even if they’re not particularly sympathetic to this particular piece of legislation or my presidency.
Said Sen. Richard Blumenthal (D), a former attorney general of Connecticut. “The court commands no armies, it has no money; it depends for its power on its credibility. The only reason people obey it is because it has that credibility. And the court risks grave damage if it strikes down a statute of this magnitude and importance, and stretches so dramatically and drastically to do it.” 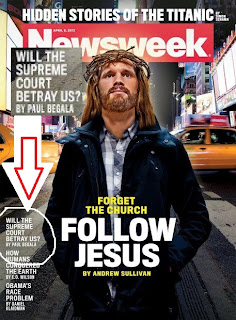 The Cover of Newsweek: Will the Supreme Court Bertay Us?
This is disgusting behavior from Obama and his allies. They routinely applaud when the courts overturn laws they do not like. If he really believes this he is profoundly ignorant of the Constitution. Since he supposedly taught Constitutional Law at Columbia, ignorance of the content of the document he is sworn to uphold is unlikely.
Which leave the obvious: he knows full well what the Constitution provides, but he does not like the limitation on his power. And therefore he aims to destroy the Supreme Court.
He and his allies are waging a war with two objectives:
It is understandable that he would want to keep the law from being overturned, and he wants to get reelected. To do this by diminishing the authority and the position of one of the other branches of government is in excusable.