The Obama Administration has announced our surrender in Afghanistan, and now our troops are paying the price for this cowardice with their lives.

You win wars in two ways:

1.  Kill or incapacitate the enemy
2.  Make them realize that they cannot win

When you announce in advance that you are ending the war on some future date you are effectively surrendering.  This makes options #2 unavailable as a path to victory, and you can therefore only win by taking path #1.  You must kill them all.

Well, we have ridiculous rules of engagement in place that prevent us from killing them all, so we have lost the war in advance.

This has several effects on the battlefield.  It emboldens our enemies and disheartens our allies. (Something that would be called treason in a sane world)

The Taliban will never negotiate or stop fighting now that they know they are a few short months away from victory.  They will simply keep the pressure on our troops with IED's and ambushes, with the occasional spectacular attack.

The worst effect of pre-emptive surrender, however, is the effect that it will have on our allies and the troops stationed with them.

The Afghans that allied with us will know that they are screwed.  Much like the South Vietnamese that fought for their freedom only to be abandoned, the Afghan National Army and the Police forces will be hunted down and executed to a man after they lose the war. Their families are also at risk, with the vengeful Taliban killing, maiming, and raping the families of those on the losing side.

The ANA troops know this.  They can see that we have lost our will to win and that the Taliban will be back in command of Afghanistan within weeks of our withdrawal. 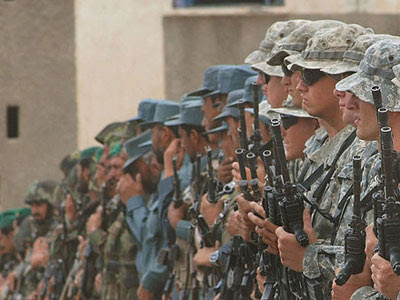 They have only one way out of this quandary: betray the Americans.  Kill a few Americans in a 'green on blue' attack.  If you die, you are a martyr to the cause and your family is saved.  If you somehow survive, you become a hero who will be welcomed in the Taliban with open arms.  It is the perfect solution to this issue.

How do we know that I am right?  Because the pace and effect of the 'green on blue' attacks is increasing every week as we get closer to losing the war.  Our troops must watch their 'allies' as closely as they watch the enemy.  These attacks will continue to grow in frequency until something really tragic happens.  We will see an entire ANA unit defect at once, and kill every American they are based with.  We will lose an entire platoon in a single attack in the near future.

More US troops are being killed by our erstwhile allies than by enemy action.  Eventually we will need to stop working jointly with the ANA, and perhaps even try to disarm them.  This will result chaos and civil war.  Our troops will be engaged in a bloody civil war where everyone in the country is trying to kill them.

All of this is the result of the incredibly stupid decision to announce our surrender in advance.

Afghanistan is lost unless we reverse course.  And all of the lives we lost there are squandered.

Posted by Kaffeesatz at 7:35 AM