I hate the crass stupidity of the tone and level of public discourse in this country.  No one seems to be able to carry on a debate without personal attacks or base language.

Even the debates we see waged on bumper stickers tends toward the stupid over time.

For example, there has been a great debate between the Jesus people and the Darwin people over the past 20 years and part of it was fought on the back of motor vehicles.

The first salvo was The Fish.  The Christians went back to the earliest and simplest symbol for Christ and the early Church and started putting fish on the back of their cars.  Simple. Elegant. It tell the whole story.  "I am a follower of Christ". Well stated.

In a brilliant counter play, the Darwinists fought back.  They put little feet on the fish, thus creating an beautiful riposte to the fish.  An evolved fish.  Take that, Christians!   Well played, Darwin, people, well played.

Then things started to to go awry. The Christians began putting the word 'Jesus' inside the fish.  What??  The fish already means 'Jesus'.  You don't have to put the word Jesus inside the symbol for Jesus.  This is the equivalent of putting the word AMERICA on a US Flag.   Ya, we got it the first time.  This symbol is intended for the profoundly stupid who are unaware they are being redundant. 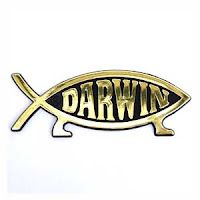 Then the Darwin people countered with a fish with feet and the word 'Darwin' or "Evolve' written on the inside.  Nooo!!!!  We go the joke the first time.  It was simple, clever, and to the point. Now you go and explain the joke??  When you have to explain the joke, it is no longer funny.

Why couldn't we leave it alone?  The first salvo was interesting and clever.  But we have to lower the debate to the lowest common denominator -- the people the need the word Jesus inside the fish.