New Jersey's ban on rifle magazines has turned out to be a dud. According to Ammoland.com and other sources, not ONE of the estimated 10 million now-illegal rifle magazines in the hands of NJ residents has been turned in to police in the first 30 days of the law taking effect.

This means that virtually every rifle owner in the State of New Jersey is now a felon.   And the same goes for Massachusetts, where a ban on bump-stocks netted only 3 banned stocks being turned into the police. 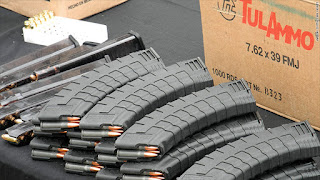 The implications of this mass civil disobedience are profound.  It demonstrates that even in the most Democratic, left-leaning state, there is very little support for gun control.

It also alters the math for the results of an actual gun ban.  In earlier posts on this blog, we talked about the mass carnage that would ensue from  99.9% compliance with the demand to turn in all your guns.  The math is pretty simple when you assume extremely high compliance: 750,000+ SWAT raids that kill tens of thousands of people and likely spark a civil war.

The 99.9% compliance assumption appears not only to be wrong, but to be exactly the opposite of what will happen in reality.  If the Second Amendment was repealed and guns banned, 750,000 people could turn in their guns and we would still have 99% non-compliance.

The gun control crows whips themselves into a frenzy over their fantasy of making every civilian gun in the country vanish.   The early results look pretty bad for the viability of that dream: exactly no one is complying with gun bans.

The NJ Magazine ban is a game changer, but not in the way the gun control commissars think.