Armed Teachers are NOT what the anti-gun crowd claims

Every time we have a school shooting, the Left calls for more gun control.   The Right advocates for removing the Gun Free zone restrictions that made the target attractive to the shooter in the first place.

The current situation is untenable: Shooters are able to roam the halls of the school shooting people who are utterly unable to to defend themselves.   This continues until they run out of victims, ammo, or someone else with a gun finally shows up.  In the case of Parkland, the response was so slow and inept, the shooter simply got bored and walked out of the school mixed in with other students. 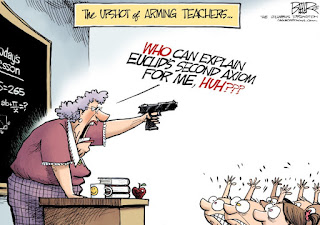 Our students and teachers deserve better. One proposal that gets wildly mis-interpreted by both sides is the relatively simple idea of allowing school personnel to carry concealed firearms.

The Left reacts with horror and derision to this idea.  They claim that armed teachers would be as much of threat to students as the actual shooter, and that you cannot expect teachers to do that which the police will not, namely charge into the hallways to hunt down the killer.

The Left also creates straw-man arguments that are not the actual proposal.  "What, teachers are going to wear body armor and carry assault rifles all day?' or "Oh, sure, the librarian and the school nurse will sweep the building like a SWAT team".

The Right over complicates the whole thing.  They advocate for rigorous training and mental health exams for teachers before they are allowed to carry concealed weapons into the school.  This will have the effect of radically reducing the pool of teachers who are willing to carry a gun.   The armed teacher population will thus be extremely small, making the whole idea ineffective.

The idea is much simpler and more effective:  Allow willing teachers to carry a concealed firearm.  This makes things much harder on a would be school shooter and will limit the time they have to roam the halls massacring students. 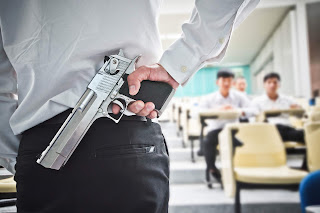 The teachers would not have training in SWAT tactics.  They would not be responsible to form fire teams and hunt down the shooter.  They would simply be able to defend themselves and the students by shooting back if the opportunity arose/

At Parkland, the gym teacher responded to the shooting by charging at the shooter.  Had he been armed, he may not have died like he did.  Another teacher heard the initial shots and went to the door to investigate.  The shooter was a few yards away, back turned, reloading his gun.  The teacher closed and locked the door, and the shooter went on to murder a dozen more people.  Had that teacher been armed she may have been able to end the rampage right there.

Armed teachers are an excellent deterrent to school shootings, and we do not need to over complicate the idea:  simply allow those teachers who are willing and basically qualified to carry a gun.  This will greatly increase safety in our schools..