George Zimmerman is getting screwed.   And our country is getting set up for a fall that will damage race relations for years to come.


The facts are pretty straight forward.  Trayvon was wandering around in the rain, smoking dope, and generally looking like he did not belong in the neighborhood.   George Martin noticed this and called the police.   Before the police could arrive, an altercation began that ended when Zimmerman shot Martin at point blank range.


Zimmerman was not charged with a crime in the immediate aftermath of the incident, and all the facts and evidence seemed to support Zimmerman’s story.  He was in fear for his life because Trayvon Martin was on top of him and pounding his head into the concrete.   There is absolutely zero evidence that Zimmerman has told anything but the whole truth.


It was only months later after a firestorm of controversy was manufactured by the professional race-baiters that charges were brought against Zimmerman.


It has been pretty clear from the beginning that George Zimmerman was being set up as a fall guy by media.  A few examples:


·         The entire incident happened months before the controversy came to light.  The outrage and indignation were not spontaneous.  It was a manufactured crisis that was dredged up by the race baiting industry, not a real grass roots reaction to the incident that was treated as though it was breaking news.


·         The charges against Zimmerman are clearly politically motivated, and not a result of police work.  No new evidence has been introduced.  There has been no change to Zimmerman’s story.  The government has simply decided to charge him with a crime based on the nasty things being said about him on the news.

·       The Media is making Zimmerman into a villain. MSNBC deliberately edited the transcript of his call to 911 to make him sound like he was profiling based on race.  Zimmerman gave a description of Martin that did not include any reference to skin color.  The 911 operator asked about skin color.  Martin then replied “He’s black”.  MSNBC cut out the 911 operator part, making it look like Zimmerman was volunteering the skin color.  The most commonly used picture of Zimmerman was in a prison jumpsuit, reinforcing the image that he is evil.  The picture that has been painted of Zimmerman is very unfair.


·         Trayvon Martin was portrayed an innocent young teen who went out to buy skittles.   The pictures that the media used were of Martin at age 13.  In reality, he was a full grown 17 year old standing at 6'2".   There are a number of menacing ‘gangster’ photos that are much more recent than the 4 year  old “St. Skittles” picture.  The only pictures that the general public ever saw, however, made Martin look like a sweet little boy.  There is no discussion of the huge gaps in the timeline between when Martin left the house until he was spotted lurking about in the rain. Taking a long walk in the rain is not normal behavior.


·         By all accounts, Trayvon Martin was a troubled youth, with drug use, guns, and school suspensions on his record.  His phone and Facebook profile have many 'gangsta' photos including someone brandishing a gun.  None of this is being widely reported, and some of it, like the pictures on his cell phone, are being actively suppressed.   Martin is being portrayed as a saint but the truth is more menacing. 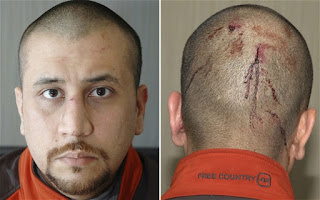 ·         Photographic evidence that supported Zimmerman’s story  (blood running down the back of his head, etc.) was ignored, while great emphasis was given to pundits speculating that he was some sort of racist vigilante.  They even lied about Zimmerman’s race, referring to him as white when he is actually Hispanic. The media has grossly distorted the facts through unbalanced and fraudulent reporting.


·         President Obama gratuitously volunteered that “if I had a son, he would look like Trayvon”.  It is an interesting use of the bully pulpit that can only inflame this situation by making it about skin color.  This is grossly irresponsible and will results in bloodshed when Zimmerman is acquitted.


The pattern is clear.  Zimmerman is being set up as the racist murderer, and Trayvon Martin is portrayed as St. Skittles, an innocent youth gunned down for no reason. 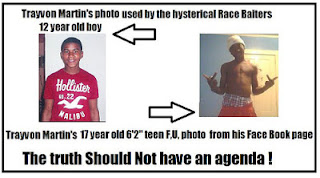 Zimmerman was within his rights and within the law that night, and the police were correct in not charging him with a crime at that time.


To make matters worse, the prosecutor in the case has wildly over-charged Zimmerman.   A jury may conclude that Zimmerman aggravated the situation and therefore is guilty of Manslaughter.  .  But the DA has charged Zimmerman with Murder 2 – murder with a depraved mind.  This is the most difficult murder charge to prove, and has made it even more likely that Zimmerman will be acquitted.


Now we have a trial going on that will have a disastrous outcome no matter what the verdict:


If George Zimmerman is found not guilty:


·         The minority community will be outraged and there will be the potential for rioting.


·         There will be ‘revenge’ attacks and murders on white people to avenge Trayvon.  (In case you doubt this, think again.  It has already happened in a number of cases)


·         Minorities will have the perception of injustice and racism reinforced.

If George Zimmerman is found guilty:


·         It will have a chilling effect on people’s willingness to get involved in Neighborhood Watch or otherwise try to reduce crime and violence.  You would have to be crazy to call the police on suspicious characters if the downside is that you end up in prison. The Kitty Genovese factor will get worse when you run the risk of public humiliation and prison.


·         The Rule of Law will have been further eroded.  Zimmerman is clearly being prosecuted for political reasons, not because he violated the law.


Either way the race baiting industry has created a win-win situation for themselves.   If Zimmerman goes to jail, it is a victory for them and will embolden their efforts to make minorities a special untouchable class of citizen.  If he is found not guilty, Martin becomes a martyr for race, and a grievance that the race hustlers will use to invoke the idea that America is a hopelessly racist country.


It is a lose-lose for the American people and the concept of equal justice and the rule of law.  Our feckless President has managed to turn a tragedy into a racially charged flash point that will damaged race relations for years.

Posted by Kaffeesatz at 9:29 AM