Travel restrictions are one of the hallmarks of a fascist or communist state.  Internal visas and the constant checking of your papers for internal travel were regular features of life behind the Iron Curtain.  It is no coincidence that the phrase "Your Papers, Please" somehow sounds more correct in a slight Germanic accent.   This is such a widely accepted feature of life in a totalitarian state that in in Casablanca the entire plot revolved around travel restrictions imposed by a tyrannical occupying government. 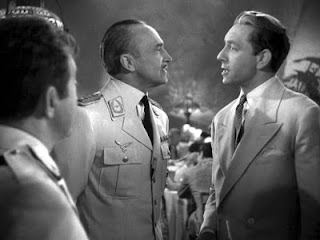 Americans have never had travel restrictions.  We have always been free to travel about the country as we please without interference from the government.

The Commonwealth of Massachusetts banned travel during the recent 'weather emergency'.  Citizens were subject to arrest and fines if they left their homes during winter storm 'Nemo'.

Let me restate that: Governor of a state forcibly subjected every citizen to house arrest if they ventured out into the snow without the permission of the state.

A friend of mine had to travel during the storm in order to rescue his elderly parents from the cold.  He called the police to get permission to drive 3 miles to their home.   Permission was denied.  He was told that they could not give him permission to travel, but they advised him to do it anyway and hope that he did not get caught.

In America.  He had to ask the government for permission to save his parents lives in America.

This is outrageous.  It is an affront to liberty and the Constitution.

It is also a sign of just how far the nanny state has progressed.   The government tells you how much soda to drink and when you can go out to playing the snow and when you are grounded and must stay in the house.

Are the people of Massachusetts so daft that they don't know when to come in from the cold?  Do they really need to be protected from their own stupidity by being locked in their rooms until the storm is over?

It is a sad day when the police are arresting people for no other reason than traveling without authorization.

Fascism has come to America in the form of the Nanny state.

Every American should be marching in the streets right now in protest over this event.

Just don't forget your papers when you leave the house.

Posted by Kaffeesatz at 8:40 PM