We Have Got To Do Something If It Saves One Life!

President Obama today opined on the subject of gun control in the wake of the Newtown shootings:


“We don’t have to agree on everything to agree it’s time to do something,”

This is utter nonsense. 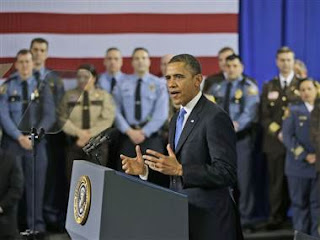 He keeps demanding that we 'do something' while refusing to make a detailed proposal of his own or explain how any of the laws that his fellow democrats are proposing would have any effect on crime or have prevented the Newtown shooting.

What does he mean when he says "do something"?  No doubt he is echoing the mantra of the media who demand daily that something 'be done' about guns.

But what?  Everyone of the proposals put forward to date are either unconstitutional, ineffective, unrelated to the problem, or all of the above.

"But if it saves just one life" they bleat in response to the argument that what they proposing is not going to help solve the problem.  Since when is 'save one life' the standard we use when evaluating safety?

We don't use that standard when evaluating other aspects of modern life:
We don't apply the 'one life' standard in these areas because it is an asinine standard.  It is a ridiculous standard for many reasons, but primary among them is that it does not consider relative risks or substitution.

If we banned antibiotics to save the few that die from allergic reactions, we would condemn millions to death by infection.  You have to consider more than one simplistic angle when making these safety decisions.  Using antibiotics is not absolutely safe but it is relatively safe, when compared to not having them at all.   So we consciously decide that despite the risks, we will use antibiotics.

It is tragic when people are murdered, particularly children.  But the absence of legal guns does not guarantee that you wont be murdered by one. Statistics indicate that the absence of legal guns actually increases the danger from guns.  The risks associated with non-gun ownership include increasing violent crime rates, including rape and assault.

Overall, gun ownership is a net positive to safety, particularly when you factor in the risks of totalitarian governments and the predation that has resulted in millions of deaths over the past century.