To Protect (themselves) and Serve (their political masters)


The police are one of the essential ingredients in a civil society.  They exist to keep the peace and enforce the law.

More and more recently, none of this appears to be true.

During hurricane Katrina the police went door-to-door searching for weapons at the order of the government.  More correctly, they kicked in doors and confiscated weapons from innocent civilians.   This is grossly unconstitutional, and none of the confiscated weapons were ever returned to the rightful owners.

The Governor of Massachusetts issues a state wide travel ban during a 'snow emergency', forcing citizens to remain in their homes during the storm.  The police were enforcing a totalitarian-esque  bans on travel without permission, formerly a feature of life only found in communist states. 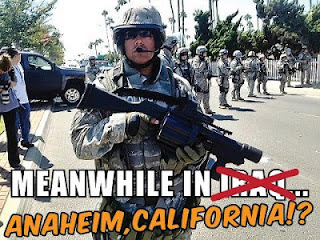 Police in California are being attacked by a lone gunman that has a grudge.  The police have reacted as you might expect, launching a massive manhunt as they take precautions to safeguard themselves and their families.  They are also arming themselves to the teeth and gunning down innocent women merely because they were driving a car that resembled that of the suspects.

There are hundreds of incidents each year in which the police raid the wrong house or are acting on bad information and kill innocent civilians who have done nothing wrong.

I am not deriding the police here -- they have an extremely dangerous and difficult job.

I am merely pointing out that those of you who are hoping that the police will 'be on our side' during protests or resistance against a tyrannical government are in for a big disappointment.  Oh, sure, there might be a Sheriff or two that refuses to enforce a federal law.  But the vast majority of the police will do exactly what they are told to do including shooting you in the face if they think you are a threat to their safety.

There are many people in this country that fantasize about how things will be when Obama finally tries to confiscate guns.  They imagine that the police will refuse to act, or that the citizenry will form militia groups to resist gun confiscation.

Think about this: a lone gunman is hunting the police and they react by indiscriminately blasting any vehicle that happens to look like the one they are seeking.  Imagine what will happen if they have groups of citizens acting against them.   They will be leveling entire city blocks without regard for casualties.

Where will they get the firepower to do such a thing?  No problem. Almost every hamlet in America now has a SWAT team that is armed like an infantry platoon.  Almost every Federal agency, inlcuding the Department of Education and The Social Security Administration now have fully armed SWAT teams. The deparment of Homeland Security recently purchased 1.2 billion rounds of hollow point ammunition.  Since it is illegal to use hollow point ammo in a war against invaders, we can only assume that these rounds are intended for more domestic targets.

Human history is replete with examples of the police and the army subjugating the citizenry.  Don't think it can't happen here.

In many ways, it already is happening here.

Posted by Kaffeesatz at 9:13 PM