The good folks up in Canada want us to know that Western Civilization has reached peak stupidity. 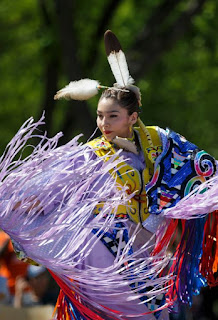 The are now introducing indigenous learning into the curriculum at the University of Saskatchewan. Founded on the model of the great British universities, the University was imagined as a grand preserve of Western thought for the children of Canadian settlers.

From the NYT article:

"Now, all that has changed. The powwow graduation in May was one example of how universities across Canada are “indigenizing” — a new, elastic term that means everything from drawing more aboriginal students and faculty members onto campuses built largely for white settlers, to infusing those stodgy Western institutions with aboriginal belief systems and traditional knowledge"

Yes.  The lore and the superstitions of the indigenous people will be infused into the curriculum because the University is "committing to change in areas including scholarship and governance, and envisioning itself as an institution of “knowledge-keeping,” as well as research and learning."

Why do we need to infuse our institutions of higher learning with indigenous lore?  Well, Peter Stoicheff, the university’s president explains it as follows:


“Universities are so inherently white and Western, when you start to push against it, you realized how intractable a lot of that is,” Mr. Stoicheff said. 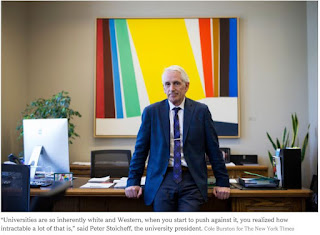 “Everything is based on reading stuff,” he explained. “Everything is laid out in a hierarchical and linear fashion. Look at the aboriginal ways, from visual expression to the wampum belt, dances and oral storytelling. It’s not linear. Everything is based on the circle.”
This is perhaps the stupidest thing uttered by a human adult.  Ever.
Everything is based on structure and knowledge??  Of course it is!  These are the foundational elements of Western thought and Western Civilization.
The 'aboriginal ways' he is so fond of produced exactly ZERO human achievements.  Oral history and Wampum belts?  This is peak technology for the aboriginals??  There is a very good reason that oral story telling was a core of aboriginal thought:  they never developed written language.
That's right.  He is infusing the curriculum with the brilliance of a culture that is at least 5,000 years behind the West.  This is profoundly stupid and self destructive.   We have nothing to learn from indigenous lore because they never invented anything.   Ok, wait, a belt. We can learn to make a leather belt like we are at a $40,000 a year summer camp.
Interestingly, he identifies the reason for this gap in achievement in his statement.  Aboriginal thinking is based on the circle;  Western thought is linear.   In other words, Western thought goes somewhere, and indigenous thought goes in circles.

This University is utterly failing it's mission.   Envisioned as a grand preserve of Western thought, it is now in the vanguard of the utterly stupid and destructive drive to undermine Western thought and ultimately Western Civilization.