During the 19th Century, there was room for legitimate debate about the most effective way to organize society in order to create the best outcome.   Marx had recently published the Communist Manifesto, and Adam Smith's Capitalism was still struggling to lift the masses out of abject poverty.  It was an area in which reasonable people could differ -- would free markets do better than planned economies? Would capitalism prevail or communism?

Well, that debate is now over.  We are at the dawn of the 21st Century, and the answer is in: communism has failed and capitalism has exceeded everyone's wildest dreams of prosperity and abundance.

And yet, there are those that still persist in hailing the virtues of socialism and communism.  This, despite the overwhelming evidence of the past 150 years.  How is this possible?

I can only think of three possible explanations: 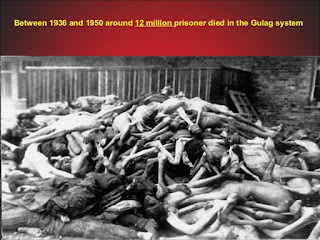 Ignorance:  They are simply unaware that socialism has failed wherever it has been tried. They have never been told about the starvation, oppression, and death that follow in the wake of socialism.  They haven't read a history book., and therefore are not aware of the millions that died at the hands of their own governments, or the complete lack of consumer goods, or the fact that poor people in capitalist countries have so much food that the single biggest health risk in poor communities is obesity.

Stupidity:  They are aware that communism killed millions of people through starvation, and that vast networks of concentration camps and gulags were set up to hold hundreds of thousands of political prisoners, but they don't see the connection between the socialized medicine they are stumping for and the gulags.    They know that Che Guevara killed people, but see no link between his sociopathy and the murderous end stage of all communist governments.   They are aware of the fact that Venezuela is circling the drain after 17 years of socialism, but don't understand why Venezuelans are reduced to eating pigeons and rats due to communist mismanagement of the food supply. 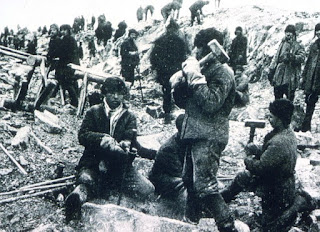 Evil:  They know full well that the history of communism is a blood soaked trail of tears and the inevitable oppression of the people.   They are aware that North Koreans are fully 3" shorter than their South Korean brothers after a few generations of socialist starvation diets. They know that free college tuition is the first step into an economic and political nightmare that will result in the death of millions.  And yet they advocate for these policies anyway.

So when college kids demand free tuition, and women demand free birth control, and when Antifa thugs roam the streets with hammer and sickle flags, ask yourself, are they Ignorant, Stupid, or Evil?
Posted by Kaffeesatz at 12:01 PM