Maybe the tide has turned.

Perhaps in a few years or decades, we will look back and see this as the turning point.

Like the moment the Germans surrendered at Stalingrad as the Japanese carriers disappeared beneath the water off Midway, the failed ouster of Scott Walker may be viewed as the pivotal defeat of the Left.

The Unions have been working on a grand bargain with politicians for 50 years: The politicians deliver super sized salaries, pensions, benefits, and entitlements, and the Unions deliver votes.

This bargain has made government workers the best paid workers in the land, with the average salary well above the average household income.  The low retirement ages and incredibly rich pensions have allowed cops, firefighters and teachers to retire at 50 years old with 80% of their pay, often more than $100k per year.

It has also bankrupted virtually every state, county, and city in the land. 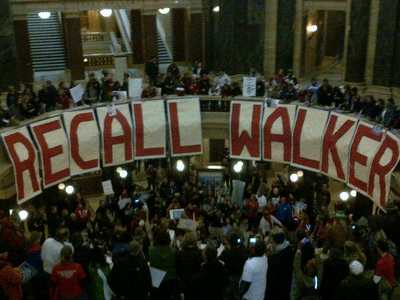 Scott Walker, Wisconsin Governor, fought to break that cycle by depriving the Unions of a small sliver of that bargaining power and by forcing the union workers to kick in a small payment towards their retirement.

The Media, the Unions, and the Left reacted with fury.  Democratic representatives fled the state rather than vote.  Protesters disrupted the capital, occupied government buildings, and burned the governor in effigy.

When all that failed, they initiated a recall election.

Well, that recall effort appears to have failed.  And failed big, with a 60-40 split in a very liberal state.

Wisconsin taxes are stable, the budget is under control, and the economy is starting to grow.  If the people of Wisconsin can figure it out how to break the control of the unions, anyone can.

The Unions have lost face, lost power, and they are starting to lose members.  Now that Union membership is no longer a requirement for a government job, Union rolls are down sharply.

Politicians no longer need to fear the power of the Unions.  The people have spoken, and they have spoken loud and clear:  We will not stand by idly while the country drives over a Union created cliff.

Perhaps this is the moment where the rest of the country realizes what we are capable of doing, and standing up in November and throwing Leftist and Statists and RINO Republicans out of office.

Our situation is much like that of the Allies in 1942 -- things look bleak, and we have a lot of fighting left, but we may have just turned the tide.