Over the weekend Mitt Romney demonstrated why he will lose the general election in the Fall.

He is letting Obama set the agenda, and he is weak and unfocused in his responses.

Obama recently announced that he is enacting the DREAM act through executive order.  This obviously unconstitutional and crass political ploy to get all these people to vote for Obama illegally. 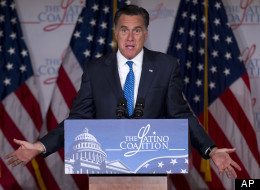 The political play here is to set up Romney as anti-Latino, and he is falling into the trap.  This is not about immigration.  This is about the unconstitutional nature of the Executive Order.

Romney should be denouncing this move in the strongest terms possible based on the illegality of the Order, not the content of the order.

Here, instead, is his response:

At a campaign bus tour, Mitt Romney criticized President Obama’s newly announced immigration policy not to deport DREAM Act-eligible youth, but did not say explicitly whether he would reverse the order if elected.

“I think the action that the president took today makes it more difficult to reach that long-term solution because an executive order of course is just a short-term matter,” Romney said, echoing Sen. Marco Rubio (R-FL).

“It could be reversed by subsequent presidents,” Romney said. “I would like to see legislation that deals with this issue. And I happen to agree with Marco Rubio as he will consider this issue. He said this is an important matter. We have to find a long-term solution. But the president’s action makes reaching a long-term solution more difficult. If I’m president, we’ll do our very best to have that kind of long-term solution that provides certainty and clarity for the people who come into this country through no fault of their own by virtue of an act of their parents. Thank you.”


Here is what he should have said:

President Obama has issued an Executive Order to enact parts of the DREAM Act, specifically issuing work permits to illegal aliens.  I strongly condemn this action because it is Unconstitutional.   The President has no power to make laws.  He only has the power to enforce the law.  The DREAM act was not passed into law by Congress.  It was defeated.  It is a grossly unconstitutional act to issue an executive order creating new laws.

I call on President Obama to rescind this order. I call on Congress to reign in the President and re-establish the separation of powers called for by the Constitution. I call on the Supreme Court to intervene and stop this madness.

If this Order still stands when I am sworn into office I will immediately overturn it and restore our Republic to the Rule of Law.

Romney's willingness to get sucked into the trap of being against immigration will not help is election campaign.  The press will overshadow the true issue at hand and play up the "Romney hates Latinos' angle.