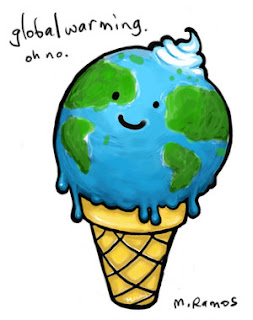 We have done a number of posts on the fact that the Global Warming people are completely making this stuff up, and that they are claiming that everything that happens is a result of Global Warming.

But we now have the ultimate in Global Warming hooey:

By Shaun Tandon (AFP)
July 5, 2011
WASHINGTON — China’s soaring coal consumption in the last decade held back global warming as sulfur emissions served as a coolant, according to a study that takes head-on a key argument of climate skeptics.

While 2005 and 2010 are tied as the hottest years on record, skeptics have charged that an absence of a steady rise from 1998 to 2008 disproves the view that people are heating up the planet through greenhouse gas emissions.

Robert Kaufmann, a professor at Boston University, said he was motivated to conduct the study after a skeptic confronted him at a public forum, telling him he had seen on Fox News that temperatures had not risen over the decade.

"Nothing that I had read that other people have done gave me a quick answer to explain that seeming contradiction, because I knew that carbon dioxide concentrations have risen," Kaufmann told AFP.

The US-Finnish study, published in the Proceedings of the National Academy of Sciences, named a culprit — coal.

The burning of coal jumped in the past decade, particularly in China, whose economy has grown at breakneck pace. Coal emits sulfur, which stops the Sun’s rays from reaching the Earth

If this is true, then we should immediately start burning more coal, not less, as the left has been demanding.

None of this passes the basic smell test of valid science.

Basic science requires that a theory be dis-provable.  That is, you must be able to design an experiment that will prove the theory false.  If you cannot, then it is not a valid theory.


This is obviously complete tomfoolery, and a massive fraud on humanity.
Posted by Kaffeesatz at 2:21 PM