All Government programs have the opposite effect, you just watch...

I have the premise that all government programs have the opposite of the intended effect, and I will publish a more detailed post on that later.

But for the moment, bear with me for the following example. 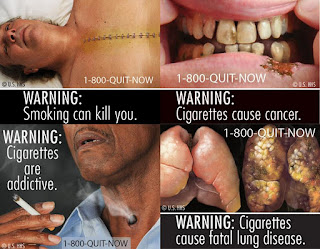 The Federal Government is now putting graphic pictures of diseased organs on packs of cigarettes in order to reduce smoking.   This will, of course, increase the number of people smoking.

Easy.  Smoking is at all time lows, and the campaign over the past 20 years to reduce smoking has gotten key stats on smoking to all time lows.

Now that the government is trying to gross people out on smoking, it will backfire on them.

Adult smokers will simply ignore them, or buy covers for the packs of cigarettes that will render the pictures useless.

But kids and teens will be fascinated.  What teenage boy is not fascinated by the gross and icky?  How many teens will be drawn to the packs just to get a 'eeewww gross!' reaction from their peers?

The Feds are planning to rotate the pictures to reduce the chance that people begin to ignore them.   What do you want to bet that people start collecting the various packs?

You watch.  3 years from now the study will come out.  Teen smoking will rebound to higher levels shortly after this new law goes into effect.
Posted by Kaffeesatz at 2:37 PM