Recent reports that someone had placed an offensive note on the apartment door at Kansas State University produced the usual histrionics and pearl clutching about how Trump has inspired racists to start being more active and vocal. 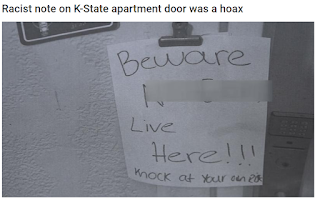 After a brief investigation, police have determined that the perpetrator was…

the ‘victim’ himself.   He wrote the sign and taped it to his own door.

Of course, the initial report reached millions, and the retraction reached a few hundred people.

Virtually every race based incident over the past ten years has been a hoax.  Time and time again, police investigations have revealed that the entire incident was a hoax.  Or, in some cases, an innocent piece of trash that caused a panic.

The problem is that the media reports, and people remember, the initial report of the incident.  Very few people ever see the retraction.  This drumbeat of false race incidents creates a false impression that America is a hot bed of racial hatred, when the opposite is true.