We have been subjected to an ever changing list of genders over the past few years.

No longer are we simply male or female.  We now have an expansive list of genders at which we can marvel.  Containing neither Male nor Female, it purports to be the complete list of genders.

Disclaimer:  Written by William Larsson aka @YoongisScalp, I think this is list is serious.  I can't really tell however, since the contents of the list of genders is completely and obviously bat-shit insane it might be a joke.

So normally, I would construct a detailed and persuasive argument for why this gender studies stuff is bananas.  But in this case, I will simply let the gender people speak for themselves. Behold!: 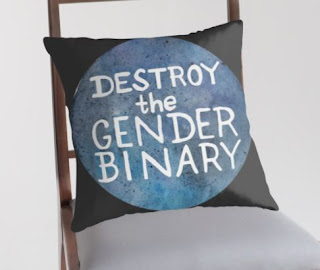 Adamasgender- A gender which refuses to be categorized.
Adeptogender– When your gender identity was obtained through your realization of your kinself. as in your kin realization spurred your gender realization. (note: the gender and kin type do not necessarily have to correlate with each other)
Aerogender– See evaisgender.
Aesthetgender– A gender derived from an aesthetic, also known as videgender.
Aethergender–  A gender that feels very wide, commanding, breathtaking and powerful.
Affectugender– A gender affected by mood swings.
Agender– Having no gender or a lack of gender identity
Agenderfluid– See cancegender.
Agenderflux– See librafluid.
Alexigender– Gender identity which is fluid between more than one gender, but the individual cannot tell what those genders are.
Aliusgender– A gender which is removed from common gender descriptors and guidelines.
Ambigender– A feeling of two genders simultaneously, but without fluidity/shifting. May be used synonymously in some cases with bigender.
Amaregender- A gender that changes depending on who you're in love with.
Ambonec– Identifying as both man and woman, yet neither at the same time.
Amicagender– A gender that changes depending on which friend you're with at the moment.
Amogender– See flirtgender.
Amorgender– When your gender changes whilst in the presence of an individual to whom you have developed a deep connection for. This could be a romantic attraction, platonic connection, a spiritual affinity or anything similar.
Androgyne– Feeling in between, or a combination of, man and woman (or boy and girl).
Anesigender– Physically feeling like a certain gender but feeling more comfortable identifying as another.
Angeligender– A gender found only among angels, that is hard to describe to non-angels. For godkin and angelkin only.
Angenital–  A desire to be without primary sexual characteristics, without necessarily being genderless.
Anogender– A gender which fades in and out, but always comes back feeling the same.
Anongender– A gender that is unknown to both yourself and others.
Antegender– A protean gender which has the potential to be anything, but is formless and motionless, and, therefore, does not manifest as any particular gender.
Antigender– A gender which can only be described as the opposite of another gender, eg. an antiboy being the opposite of a boy. Also known as ungender.
Anxiegender– A gender affected by anxiety.
Anvisgender– See apagender.
Apagender– A feeling of apathy toward one's gender that causes one to have no desire to look further into it. Also known as lethargender, inersgender and anvisgender.
Apconsugender– A gender in which you know what it isn't, but not what it is, sort of like the gender is hiding itself from you.
Apogender– A subset of agender in which you feel not only genderless, but entirely removed from the concept of gender.
Apollogender– When you have around 9 (can be anywhere from 6 to 10) different distinct feelings of gender that have combined into one big gender identity.
Aporagender– A gender separate from man/boy, woman/girl, and anything in between while still having a gendered feeling.
Aptugender– A gender which feels fitted and secured.
Aquarigender– A gender which is fluid between infinite feelings. Sometimes, these feelings may be close to an existing term, and sometimes they are indescribable or abstract. Also known as genderflow.
Archaigender– A gender that is ancient/old and big, and can either only be described with those words, or is correlated to them.
Arifluid– See arigender.
Arigender– Switching between nonbinary genders while feeling particularly associated with one feeling. Also known as arifluid.
Arithmagender– A numerical gender. it can range from any number/s, positive, negative, decimals, fractions, etc.
Argogender– A subset of genderfluid wherein the changes between one's separate genders or the parts of one's gender happen gradually, or a gender that is defined by its slowness.
Astergender– A gender that feels bright and celestial.
Astralgender– A gender that feels connected to space.
Atmosgender–  Having a gender which is present, but unable to be grasped or firmly defined.
Autigender- A gender which can only be understood in the context of being autistic.
Autogender– A gender experience that feels deeply personal to one's self.


Axigender– When a person experiences two genders that sit on opposite ends of an axis, one being agender and the other being any other gender; these genders are experienced one at a time with no overlapping and with very short transition time
These are just the A's.  Yes.  There are 26 more letters of this nonsense.
A quick read of this list exposes this gender nonsense as the insane ravings of the demented.
Here are a few of my favorites from later in this alphabet soup of insanity:
Canisgender– A small, doglike gender
Circgender– A gender that feels so magical and grand as to be indescribable.
Ekragender– A gender one has blown up into a million pieces or destroyed via detonation. Also describes those who wish they could do so.
Glassgender– A gender that is very sensitive and fragile.
Jupitergender– A gender that is so large and present, one is not quite sure what it is because it's too big to see clearly, but it is definitely there and one knows that they're definitely not cis

The Jupitergender refers to cis gender, which is the state of identifying with your biological sex.  A gender which is notably absent from the 'complete list of genders'.
This nonsense is taken seriously by far too many people.  It is now becoming a crime in some states and cities to use the wrong pronoun when addressing someone, ie, misgendering someone.
Given the completely over the top craziness of the genderfluid crowd, it should be a blast guessing which pronoun sends you to jail and which one makes you an ally.

Posted by Kaffeesatz at 3:01 PM