#TakeThe Knee is a Leftist Program that will hurt Blacks

Blacks have it tough in this country.  Not as tough as they do in the rest of the world, to be sure.  But they have it tougher than the average white person.

They live in mostly Black neighborhoods, where murder and crime are completely out of control.  They attend public school with other Black students, where academic achievement is shockingly low. And they are disproportionately affected by Leftist Democrat government policies, which is a tragedy for the ages.

There has been one bright shining light for Blacks over the past 40 years, however. 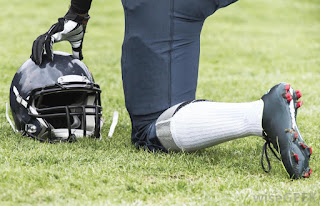 Professional sports has created more black millionaires than any other industry.  Basketball and Football have provided Blacks with a disproportionate share of the jobs and created thousands of wealthy Blacks.

Now the Left has decided that the NFL must be infused with progressive socialist politics.  The #TakeTheKnee protest has polarized the country and the fans of the NFL.  Ratings are tanking and the general population is taking notice of the protest.

Even in extremely liberal New England where Elizabeth Warren sits in Ted Kennedy's Senate seat, the fans at the Patriots game booed the #TakeTheKnee protesters during the National Anthem.

The NFL is in trouble.  The ratings are falling, and, as has been learned in past strikes, they are very slow to recover.

Fans get caught up in the game.  They revel in the rivalries, and live vicariously through the team.  It becomes a self-reinforcing cycle.

Once that spell is broken, it is very hard to get back into the game.

The NFL is losing it's base.   NFL fans are middle America.  NFL fans are beer drinking, pick up truck driving, flag waving Americans.   They won't tolerate this disrespect of our Nation.

As ratings dry up and attendance falls, the players will be hardest hit.  The owners cannot change a lot in the bloated cost structures of their teams -- they have to pay for the Stadium and the lights no matter how many fans show up for the game.

This will end the decades long short cut to the middle class that Blacks have enjoyed. This will end up hurting the very people that the protests were designed to help in the first place.

You have to give the Leftist Democrats credit for consistency.

Everything they do screws over the Black man.