The Black Lives Matter folks have published a manifesto that lays out in great detail 6 Demand and 40 Policy recommendations.

I'll save you the time required to read it.  They want Free Stuff. 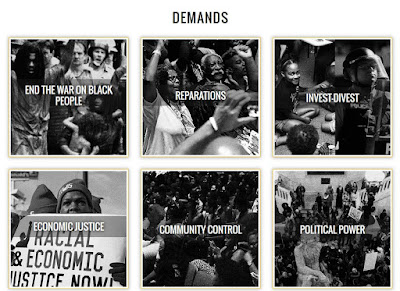 The six demands are:


Some of these are blatant in their demand for Free Stuff.  The specific policy demands under Reparations and Invest-Divest, and Economic Justice, for example, are basically a list of Free Stuff they want.  Free school, free healthcare, free basic income, etc.

But even the Demands for Political Power and Community Control are basically demanding free stuff.   They want Participatory budgeting and Protection and increased funding for Black institutions
which are both ways of getting more Free Stuff.

The only Demand that is not loaded with Free Stuff goodies is End the War on Black People.  This is essentially a demand to be free of responsibility and consequences.   No bail money, no consequences for having a criminal record, no rules for behavior.    This is a recipe for social disaster.

Criminal behavior needs to have negative consequences or it will grow out of control.   Crime and murder are already rampant in Black communities.  Making crime consequence-free will not end well for Blacks.

Black Lives Matters had never been about saving the lives of Black People.  If BLM was truly interested in Black Lives they would be protesting on street corners on the south side of Chicago. Instead, they are grandstanding at the Democratic National Convention and shutting down Trump rallies.

Now they have clarified for us what they are really all about:  Free Stuff.