On the Deck of the Titanic

Almost four years ago America looked at the two presidential candidates and chose the one we wanted to lead our country. We chose the path we wanted to take.


Aided and abetted by the leftist media, Obama was elected to the Presidency.


Many people were excited and there was talk of how this was a watershed moment in America.  And they were right.  This election will be looked at as a critical inflection point in world history.


It will be seen as the moment that America decided to commit suicide.


When you look back at the decline and fall of the many empires that have gone before us, it is often difficult to pinpoint the exact moment when they became doomed.   But we shall not be burdened with this challenge.  We will know.


We gave up our ideals and our identity as we elected this closet-Marxist to the highest office.


His prescription for America was billed as an elixir that would cure all of our ailments.  What he was offering was hemlock.  Over the past four years we have consumed a steady diet of this Marxist-Keynesian poison and the results are becoming clear. We are dying as a nation.


Americans dominance in every field of endeavor has made us wealthy beyond the wildest dreams of the kings and emperors of yore.  It enables event the poorest among us to live better than anyone else in the world by any measure you care to take. This wealth has also generated envy and hatred for America.


This envy and hatred does not come only from our enemies.  It also festers here at home.  Since the turn of the century there has been thread of progressivism and populism running through America.  Both of these terms are designed to mask the true identity of the socialist ideology lying just under the surface of these movements.


Well, the people that despise American ideals have finally ascended to the highest office in the land.  The short term results are bad and will continue to echo for many years to come.  But the long term results will be disastrous for the United States and the entire world:


·       Radicalized Islamic nations have risen throughout the Middle East with the support and approval of the Obama administration.   This crescent of Muslim Brotherhood-green will result in wars, oil embargoes, genocide, the repression of millions of women and non-Muslims.


·       Obama has deliberately spent us in to $15 trillion in debt and counting.  Our debt levels will cripple us financially for the foreseeable future.  Every American will be poorer in the future due to the wanton and wasteful spending.  Unlike previous spending binges, we don’t have anything to show for it.  At least FDR gave us some dams and roads.  This administration has simply squandered the money.


·       Our military folly of fighting a war in which we have pre-announced the date of our surrender, plus the looming budget cuts to the Air Force and Navy, will embolden our enemies and leave us unable to project power across the globe.  When America is weak, our enemies will act.  Our military weakness will certainly lead to a shooting war or the wholesale abandonment of our allies.  God help Israel if the Arabs invade in a few years.   Weakness encourages aggression, and we will be the targets of plenty of aggression.  It is not inconceivable that this devolves into World War III.


·       A nation of dependents cannot survive.  The Obama administration has encouraged and created dependency to record levels.  We are nearly at the tipping point where more people will get benefits than there are people paying in.  As Tocqueville point out, we cannot survive when the people can vote themselves more ‘freebies’.  Reducing our dependency levels will be very painful and may well result in the sort of street riots that we saw in Greece.  We may well already be past the point of no return, where the political forces driving spending cannot be reined in. 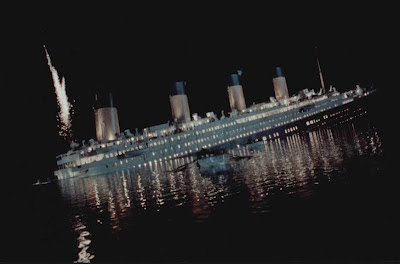 Many disasters unfold slowly.  But there is always a point of no return where the result is inevitable.  The Titanic was doomed long before it started to take on water because the mass and speed of the ship meant it could not turn fast enough to avoid the collision.  The people on that ship were effectively dead long before they even knew something was wrong.


Think about the fact that proposed small decreases in the rate of spending increase are met with howls of protest and remember that we have to actually cut spending 40% just to stop adding to the national debt.   Obama may have set us on a course with an iceberg that it is too late to avoid, and like the Titanic, we are doomed to sink and perish and there is nothing on earth that can stop that now.