The lunatics that are squatting on the streets of NYC have been incoherent and increasingly anti-semitic. 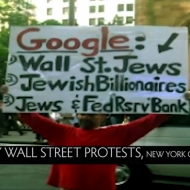 With their signs, chants, and Marxist trappings, they have finally inspired terrorist Bill Ayers to release the following manifesto to clear up the confusion over what the heck they are protesting:

What follows is the first official, collective statement of the protesters in Zuccotti Park:
As we gather together in solidarity to express a feeling of mass injustice, we must not lose sight of what brought us together. We write so that all people who feel wronged by the corporate forces of the world can know that we are your allies.
As one people, united, we acknowledge the reality: that the future of the human race requires the cooperation of its members; that our system must protect our rights, and upon corruption of that system, it is up to the individuals to protect their own rights, and those of their neighbors; that a democratic government derives its just power from the people, but corporations do not seek consent to extract wealth from the people and the Earth; and that no true democracy is attainable when the process is determined by economic power. We come to you at a time when corporations, which place profit over people, self-interest over justice, and oppression over equality, run our governments. We have peaceably assembled here, as is our right, to let these facts be known.
To the people of the world, We, the New York City General Assembly occupying Wall Street in Liberty Square, urge you to assert your power.
Exercise your right to peaceably assemble; occupy public space; create a process to address the problems we face, and generate solutions accessible to everyone.
To all communities that take action and form groups in the spirit of direct democracy, we offer support, documentation, and all of the resources at our disposal.
Join us and make your voices heard!


Frankly, I have no idea what most of this means.  "They have accepted private contracts to murder prisoners even when presented with serious doubts about their guilt."  What???

The ones that I think I understand are sheer nonsense: "They have poisoned the food supply through negligence, and undermined the farming system through monopolization"  Poisoned the food supply????  We have more and better food than any other place or time in history.  What the heck are they talking about?

Several of them are non sequitors.  "They have donated large sums of money to politicians, who are responsible for regulating them" is not only poor grammar, but has no point. The money that they have donated is within the legal limits, and it is not the companies fault that politicians have overstepped their constitutional authority to regulate every aspect of American life.

While most of the signs mention Jews as the root of all evil, here the culprits are called "they" without any clear statement of who or what is being discussed.

If this is the best that the Left has to offer, then not only are the morally bankrupt, but they are scraping the bottom of the intellectual barrel as well. .