Are Liberals Retarded? Or, Do They Think Everyone Else Is???

Ezra Klein of the Washington Post recently wrote an article claiming that we should stop donating to private charities and, instead, donate to think tanks and policy groups that will direct the government to solve the problems.

His reasoning in the article is, well, stupid.  The essence of his argument is as follows:

Charities do a better job solving problems than the government as the government is blunt and inefficient
Most people understand this and give money directly to charities.
Charities have limits on scope and scale, government does not
Therefore, we should not donate to charities, but rather to 'think tanks' that make government act more like private charities
The government will then do the charity work
This extends your charity dollar farther, and is therefore good.

There are several problems with this reasoning, and the essesnce of it is captured in the 9th paragraph.  Klein claims that "if you donate to a food bank, it can provide only as much food as your money can buy".  So far, so good.  Then he claims that we should instead fund non-profits that will persuade legislators to create a new program that can "do much more than any single food bank".

So he is proposing that we donate money to create new programs that will feed people we chose not to feed directly.  Where does the money for the new programs come from?  Who pays for that?   Well, the taxpayer, of course.  But the logially retarded Mr. Klein does not seem to understand that 'programs' are funded by tax dollars, ie, out of the same pocket that the donations came from.

This is the essence of all liberal thinking.  Taxes are magic.  The money just appears.  It does not come from the pockets of the taxpayers.

Think about what he is saying.  Don't feed people yourself.  Let them go hungry today.  Instead, influence Congress to take money from other people to feed the hungry at a later date.  If, of course, any of them are still alive.

Of course, Mr. Klein does understand that taxpayer dollars come from taxpayers. He is just banking on the fact that other people pay more in taxes than he does.  So the best use of his 'charity' dollars is to force you to pay for the things that he values.

So I ask...retarded or does he think we are retarded? 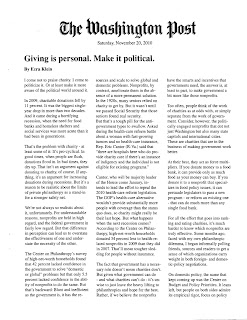