The problem with taxes is that we don't pay them. 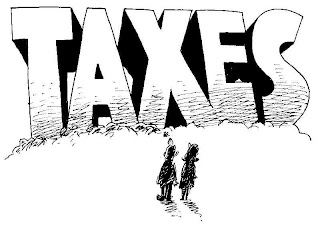 Well, we pay them, but not directly.   When we buy a house, the taxes are buried in the transaction as another 'closing cost'.  When the real estate taxes are due they get escrowed in with the mortgage payment and we forget that part of the monthly mortgage goes to the government.

When we buy all sorts of things: gasoline, computers, food, we pay taxes in the form of sales and use taxes.   But when we reconcile our check book at the end of the month we only see the total price, blinding us to the fact that we paid 5% or more to the government.

Federal tax withholding has an even more pernicious effect.  When the guy making $20 an hour gets his check at the end of the week, he only sees the $623 that he nets.  And he forgets that he just paid $177 in taxes.  And when you ask him on April 15 how much he paid in taxes he won't be able to tell you.  But he will know to the penny how much of a refund that he received.

This invisible taxation is ruining the country.  People don't understand how much they are paying.

And because they don't understand that they are far more willing to vote for politicians and programs that increase government spending.  They struggle to make ends meet each month without realizing that the biggest check they write each month is to the to government.

So here is the proposal:  No more withholding or other indirect payments.

Everyone must pay the government directly.  Each worker gets paid the full amount of their salary.  They must then remit directly to the government the amounts owed for taxes.

For sales and other transactional taxes, the taxes may be collected at the point of sale, but must be conducted as a separate transaction.  So in the future, your credit card bill will say:

I think you will see much more resistance to increased government spending and new programs when people are more fully aware of the actual amounts that they are paying in taxes.

A Constitutional amendment prohibiting agency payment or indirect payment of taxes will make the entire process of taxation more transparent and obvious.  And therefore, less likely to happen!