Bernie Sanders called for the criminalization of the Oil Industry during the second Democratic Debate. 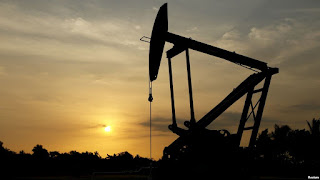 If you want to destroy the US, and the global economy in a single stroke, you could not come up with a better solution than to criminalize the energy industry.

What will they do?  Arrest the CEOs'?  The Board members?   Where does it stop?  Do they arrest rig workers as they come off a 3 month rotation in the Gulf?

The entire industry would collapse.  Production would crash.  Prices would sky rocket.  Supply would dry up.  Gasoline rationing and price controls would soon follow.

The entire economy would collapse.  As production fell, they would begin to arrest workers as 'saboteurs' and 'enemy of the people'.  Oil workers would flee the fields, and production would grind to a halt.

Think this sounds far fetched?  Well, it is almost exactly what has happened in Venezuela over the past 15 years.

Bernie Sanders is a power mad socialist tyrant bent on nothing less than the utter destruction of the US.
Posted by Kaffeesatz at 3:57 PM