The Feminist war on Reality


Feminist Professors are questioning the validity of math and science because these disciplines were created largely by white males.

Rochelle Gutierrez  is a professor at University of Illinois specializing in “equity issues in mathematics education.” Her focus is on “paying particular attention to how race, class, and language affect teaching and learning,” which basically means that she sees “white privilege” in every facet of education. In the case of math, Gutierrez thinks that because minorities are supposedly deficient in the subject compared to “whites,” the subject is flawed and in need of an overhaul. 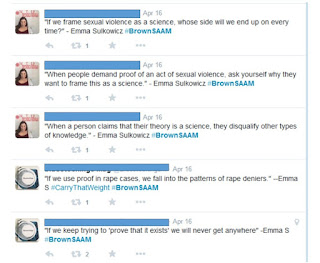 Sara Giordano, a feminist professor at the University of California-Davis has vowed to “challenge the authority of Science” by “rewriting knowledge” through a feminist lens. She argues that "traditional science" relies on "a colonial and racialized form of power," and must be replaced with an "anti-science, antiracist, feminist approach to knowledge production.

However, Giordano is hopeful that feminists can work towards creating new approaches that don’t conflate science with truth.

“We need to disrupt the epistemic authority of Science…[and] the assumption that science = truth,” Giordano writes, further arguing that this can be done by implementing a “feminist science practice that explicitly unsticks Science from Truth.”

'Unsticks science from Truth'?  'Knowledge production must be approached with anti-science'?? How are these statements not grounds for immediate removal from the University faculty?

You can get a sense of the motivation here when you read the tweets pictured above.  Feminists claim that rape culture exists.  When rational people demand proof to support this claim, the Feminists attack the idea that evidence is needed.  This is fundamentally irrational and evidence that there is not proof of rape culture.

This is more than a war on science, this is a war on reality itself.  The Left is engaged in a full retreat from reality and is in the process of constructing its own bubble where facts and logic do not exist.

There is a very simple reason for this:  Marxism and critical race theory are not supported by the facts.   None of their favorite theories are aligned with the real world or work when tried.  And when reality and theory conflict, naturally, it is reality that must be modified.

This is truly amazing.  The denial of reality in the service of dogma.

When your theory is not supported by the evidence, you are supposed to modify the theory.  Instead, they are seeking to keep the theory and throw out the idea of science itself.

The Left is losing the battle of facts.  They have lost the battle of logic.  This is a clear example that the Left understands that the facts are not on their side.

Posted by Kaffeesatz at 5:01 PM