Words Matter, So Shut Up!

The Left has been on a long campaign to shape the words that we use in order to shape our thoughts and political outcomes.

George Orwell saw this clearly in his novel 1984.  The socialist government controlled the words that were used in order to shape the narrative.  The war department became the Ministry of Peace, forced labor camps became joy camps, and to have thoughts that were not politically correct became Thoughtcrime. 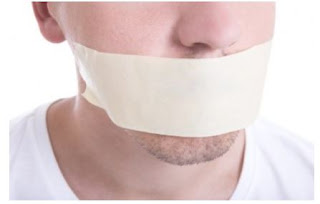 In the real world, leftists enthusiastically used Orwell's warning as a blueprint, and began enforcing speech codes.  Any utterance that was not acceptable became 'politically incorrect'.  Colleges across the US are now enforcing draconian speech codes and declaring certain ideas to be oldthink, and thus not permitted on campus.   Facts and logic are tools of the oppressive patriarchal society and must be replaced with bellyfeel, the blind, enthusiastic acceptance of an idea.

The reason is very simple.  As Andrew Klavan has to eloquently noted, they want you to shut up.

Now that the evidence is in, Socialism cannot be defended with facts and logic.  The 100 years of uninterrupted social and economic disaster that has unfolded in every socialist country has made it impossible to defend socialism.   It cannot be defended, therefore, it must not be discussed.

This can be seen on campus and in the streets, and Leftist bullies attempt to silence their opponents.  When non-lefty speakers try to present their ideas on campus, the unhinged radical Left and the university administrations (but I repeat myself...) will shut the speakers down through violence, disruptions, and administrative red tape.   Since they cannot refute the ideas of Ben Shapiro or Ann Coulter, they must be shouted down or banned from speaking altogether.

The next step in the plan to get you to shut up is to justify beating you up physically if you start talking.  Leftist are now saying that 'hate speech' is equivalent to violence, the therefore actual violence is justified in response to hurtful words.

Since the left defines the made up concept of 'hate speech' as 'anything you say we don't like', you are now at risk of being assaulted for everything and anything you say.

So the safest option is to shut up.
Posted by Kaffeesatz at 10:38 AM