I think they are starving because of socialism.

Don't believe me? Then listen to NPR. 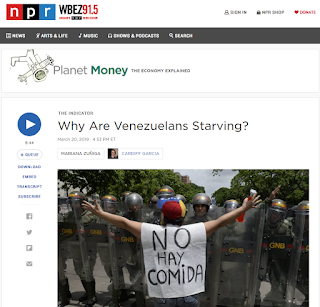 NPR has some ideas in a recent report titled Why are Venezuelan's starving?  Given the reputation for the Leftist orientation of NPR, you might be surprised who they blame.

Don't get too excited. The NPR report never uses the word Socialism, or draws a direct link between Chavez's openly socialist policies and the collapse of Venezuela.  But it does talk about the government and government policy being the reason for the collapse.

Here is a key part of the transcript:

GUILLERMO ARCAY: That's something that started to change when Chavez started implementing what he called socialism of the 21st century policies.

ZUNIGA: Guillermo is referring to Hugo Chavez, Venezuelan late president. There were several agricultural policies that Chavez put in place. The first policy was price controls. That started in 2003.

GARCIA: Yeah. And price controls are exactly what they sound like. The government forces companies to sell their products below a certain price. The price is controlled. It is capped.
So in this case, back in 2003, the Hugo Chavez government started capping the price of food. Supermarkets could not charge people more than a certain amount for the food that they bought from them. It started with basic foods, like sugar and milk. And the goal was to make food cheaper for Venezuelans. But there is a reason that price controls are considered bad economics.