This is NOT helping


I asserted last week the that Trayvon Martin trial was going to be a disaster for this country.

I predicted that there would be retaliatory violence attempting to avenge Trayvon if Zimmerman is found to be not guilty of Murder. 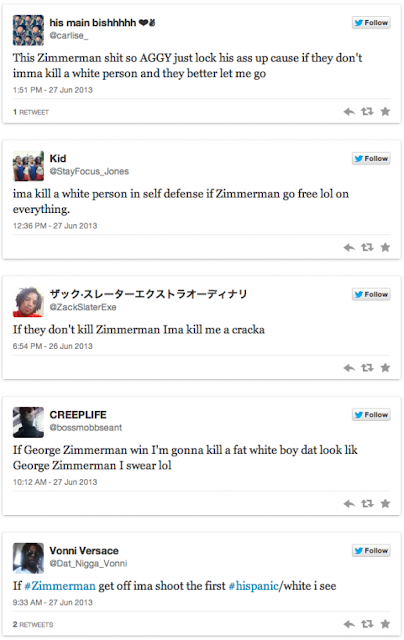 There are beatings and murders "for Trayvon".

The Department of Justice is taking a break from organizing anti-Zimmerman protests to gin up civil rights violation charges.

The prosecutor in the case, having failed utterly to prove her case in court, is now out on the talk show circuit calling Zimmerman a murderer.

Talk show hosts are calling Zimmerman a racist, and proclaiming a 'return to Jim Crow'.

Liberal magazines are calling the neighborhood watch "Slave Patrol", claiming that keeping an eye on your homes is the equivalent of tracking down runaway slaves.

Now that the word is out that Zimmerman is only half white (making him as white as, say, Barack Obama) they have resorted to claiming he is a 'white Hispanic' and that he has 'opted out' of being a minority and embraced white privilege.


The Left is bashing the entire country (as usual) as a fever swamp of racial animus.  Jesse Jackson has even asked the UN to look into civil right issues around this issue.

The Democrats are trying pass laws against Profiling (whatever the heck that is) and self defense.

Racial tension are once again on the rise, and the Obama Administration is doing it's level best to fan the flames.   Eric Holder is out there telling audiences that he worries for the safety of his own children in the face of racist cops.

This is a huge disaster for race relations in this country.

This entire incident has been manufactured by the Democrats and the Race Baiting industry -- not one of their assertions is backed up the facts -- and so, the blame for the fallout can be laid squarely at their feet.

Sadly, the real and lasting damage is to Black people themselves.

As Obama undoes all the economic and racial progress that has been made over the past 30 years, this trial and the faux-hysteria that follow will only serve to reinforce the perception that blacks are being held down by The Man.

This attitude (whether accurate or not) is self defeating and helps keep the black community mired in poverty and violence.

When the deck is stacked against you, why bother to even try?
When The Man is racist, why cooperate with the cops to put criminals in jail?
When the entire system is rigged against you, why get an education and 'sell out' to the whites?

All of this is self defeating, of course, and the only beneficiaries of a permanent black underclass are the parasites that feed off of their votes.

I am talking to you, Democrats.

I am taking to you, Barack Obama.

* Not an actual quote

Posted by Kaffeesatz at 4:05 PM No comments:

The Veto as Political Farce


Governor Quinn recently vetoed the legislation that would have permitted Illinoisans to carry concealed weapons.  The legislature, as promised, promptly over-rode his veto.  Concealed Carry is now (or soon to be) the law in Illinois. 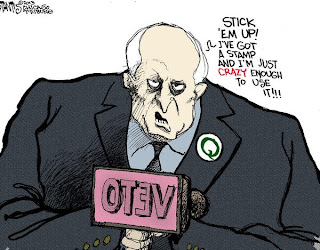 His reasoning was specious and overtly political.


The entire spectacle came about when the courts ruled last year that the then-current complete ban on concealed carry was a violation of the Constitution, and that citizen’s must be permitted to keep and bear arms.   Illinois is the only state in the entire country that does not permit some form of concealed carry.


Quinn’s veto was expected, but his comments asking for amendment were not.
He makes a number of unsupported assertions liked to flawed logic and emotional appeal.  For example: 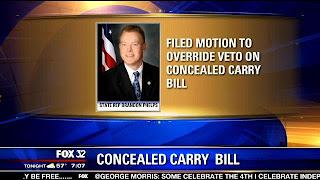 "The bill provides no cap on the number of guns or on the size or number of ammunition clips that may be carried. Instead, it allows individuals to legally carry multiple guns with unlimited rounds of ammunition, which is a public safety hazard,” Quinn wrote in a message to lawmakers.


The obvious question here is… based on what facts?   There is no evidence or study or statistics that link the number of guns or bullets that law abiding citizens can carry to crime.  This statement is false.  In fact, the evidence is overwhelming that when the number of guns in the hands of law abiding citizens increases, the crime rates decrease.
It also betrays Quinn's ignorance about guns.  Multiple guns?  It is hard enough to conceal one gun effectively, never mind multiple guns.  Apparently he watches too many movies and thinks people are wont to carry an arsenal around with them.  If his objection is that people who intend to do harm can now carry multiple guns, what makes him think that a law will stop them from doing exactly that?
“Recent shootings, such as the horrific tragedy in Newtown, Connecticut, where a gunman fired 154 bullets in less than five minutes, have put a spotlight on the extreme and unnecessary danger posed by high-capacity ammunition magazines,” Quinn wrote.


This is emotionally appealing until you remember that the Newtown shooter did not carry concealed.   Nor did he use a handgun.  Nor was he issued a concealed carry permit or a gun permit of any kind.   The Newtown shooting has exactly zero connection to the concealed carry debate unless you consider that all of the adult victims were not allowed to defend themselves in the ‘gun-free” school zone.
The best argument FOR concealed carry is that a lone madman was able to gun down nearly 30 people in a gun free zone with impunity.   Like every other mass shooting, the Newtown massacre ended when someone else showed up with a gun.  Too bad every adult in the building was, by law, unable to defend themselves and the children.


Under the bill, loaded guns would be allowed in stores, restaurants, churches, children's entertainment venues, movie theaters and other private properties, unless the owner visibly displays a sign prohibiting guns. As a matter of property rights, the legal presumption should always be that a person is not allowed to carry a concealed, loaded gun onto private property unless given express permission.


Quinn has an interesting new-found concerns for the rights of private property owners.   Of course, what he is referring to is not truly private property.  He is referring to public spaces on private property.  Places where the government has usurped the property owner’s rights in a multitude of ways.  (Just try to limit the people that can enter your store based on skin color or religion.)
All of these objections are designed to give him political cover with his base, and to continue the narrative that guns are bad.  Democrats are openly hostile to the concept of liberty and independence and are therefore implacable foes of self defense firearms.
* Not an actual quote


Posted by Kaffeesatz at 3:32 PM No comments:

Zimmerman was acquitted because ALL of the facts, circumstances and evidence back up his story. In fact, some of the most damaging testimony came in answer to questions the prosecutor asked.
Gems like:

Prosecutor: So what other (than shooting Martin) options did George Zimmerman have?
Witness: None.

Even the prosecution stated that everything Zimmerman did was legal. Watch the closing arguments from both sides -- the prosecution had no case whatsoever and resorted to simply making things up.

Since Trayvon Martin died hundreds, no, thousands of black teens have died by gunshot, with the vast majority of that being black-on-black crime. A black teen was shot this weekend in Chicago because he refused to join a gang. If you want to be outraged, get some perspective and get mad about the rivers of blood running through the streets of cities like Chicago.


It would be nice if we could channel all this emotion into something that would help reduce the ongoing tragedy that is life in our inner cities instead of whipping up hysteria and faux-racism charges.

Go to www.legalinsurrection.com for a summary of the actual facts and testimony.
Posted by Kaffeesatz at 2:58 PM No comments: