Some Promise Zones are More Equal than Others

Our fearless leader, Barack Obama, has proposed Promise Zones as the cure for what ails the country.

His announcement that the Federal Government will, by Executive Order, put teams of Federal Workers on the ground to 'cut red tape' and give money to community groups and leaders, is perhaps the largest over reach by any President, ever.

There is one good thing here:  At least Obama admits that government regulations destroy opportunity and hinder economic growth.

Other than that, there are a few problems with this idea.

Incoherence -- Obama says 'In a country as great as this one, a child’s zip code should never be what determines his or her opportunity' and proposes to fix this by giving extra help to people... in certain zip codes.

This makes no sense even in the rarefied air of Washington rhetoric.

Totalitarianism in Populist Drag --  This is the exact same idea proposed in the 80's by Jack Kemp.  His so-called Enterprise Zones would give certain politically favored people economic and social advantages over other, less favored people.   The problem then, as now, is that this is a massive transfer of power to the government.

Imagine a world in which a politically drawn line is the difference between success and failure for your business.  If you are subjected to a web of crushing federal regulation and your competitor across the street is not, your life's work and investment will be destroyed overnight.   The temptation to gerrymander the lines to save your business will be strong, and the state will literally have the power of life or death over people and their businesses.  This will not go well. Unconstitutional --  In theory, the regulations that Obama is promising to waive for certain favored constituencies are based on laws passed by Congress.  The President has no power to change these laws.  Jack Kemp at least proposed his idea in the form of legislation.  This president as planning to do this by fiat.  Even if this is a good idea, which it most assuredly is not, it is unconstitutional to implement by Executive Order.   Not to mention that this likely fails the 'equal protection' clauses of the Constitution.  Two different sets of laws depending on which side of the street you live on?  Not going to pass muster with the Supreme Court, I would imagine.

This announcement is dripping with stench of boondoggle spending and cronyism.

These areas – urban, rural, and tribal – have all committed, in partnership with local business and community leaders, to use existing resources on proven strategies, and make new investments that reward hard work. They have developed strong plans to create jobs, provide quality, affordable housing and expand educational opportunity, which we’ll help them execute with access to on-the-ground federal partners, resources, and grant preferences.
Each of these designees has a proven track record of working collaboratively; their officials work as a team with business, faith-based and non-profit organizations; and with the public to ensure that opportunity becomes real for every member of their communities.

Let me translate for you:  we are going to give gobs of money to ACORN-like community groups and they are going to ensure that Democrats get elected forever.

This is right out of Animal Farm.  The people inside the Promise Zones will be more equal than those poor benighted souls left on the outside.


Posted by Kaffeesatz at 4:59 PM No comments:

When is 100 million dead people not so bad?  Well, when it is not true, for starters.

The latest hysterical claims from the global warming fanatics is that 100 Million people will die from the effects of Climate Change.

Why should we care what these whack jobs are claiming? 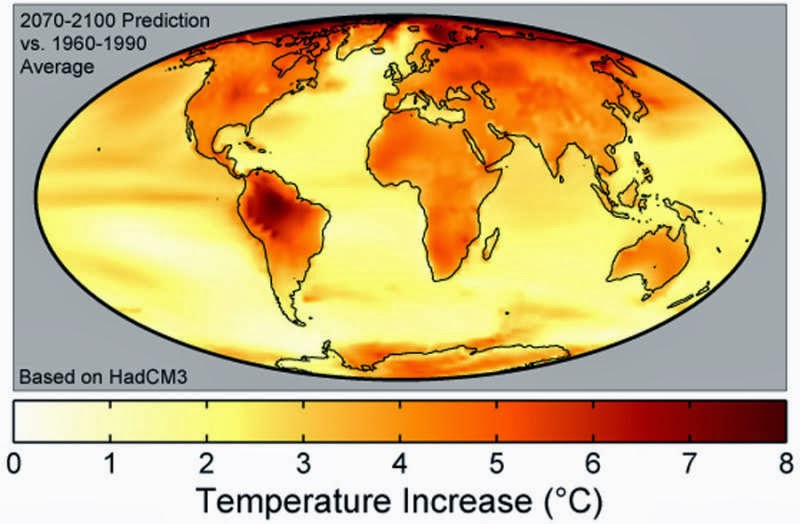 One reason is the that other Leftist whack jobs are using this entirely made up number to excuse the actual 100 million murders perpetrated by socialist governments in the last century.

Let's look at the claim they are making.

Basically, they are taking a small increase in mortality they claim will happen (ie, that they have completely made up) and multiplied it by a lot of people over a very long time.    They are claiming 100MM deaths over 70 years against a world population that is 6+ billion and growing.

If you use a long enough time frame against really big population numbers you can come up some really big made up numbers.

The percentage of increased mortality they are estimating is roughly .02%.  This is 2/10ths of one percent.

This percentage is so small as to be undetectable and below any statistical relevance.

This claim is a lot of hot air.

The Left continues to bang the drum that the US Military is committing murder mass murder as we fight wars around the world. 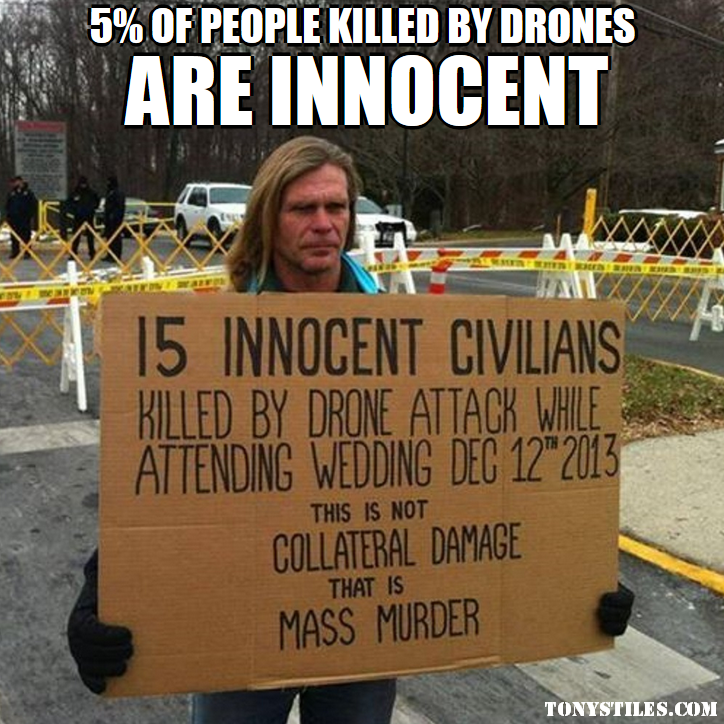 The latest claim is that 5% of the people killed by drone strikes are innocent.

If that number is true, then the United States is the most benevolent and caring country that has ever been established.  That number means that we are 95% accurate with our drone strikes.

There has never been a military that has come close to that degree of accuracy.  Civilian death have always been a part of warfare.  In some cases, civilian deaths were the entire point of the war. As recently as WWII the US military deliberately targeted civilian populations as a means to win the war. Even if you ignore the obvious events like nuking Hiroshima, we bombed Dresden and killed 100,000 civilians on purpose.

We should be proudly trumpeting our incredible skill and technical prowess as further proof of American Exceptionalism.

Posted by Kaffeesatz at 10:41 AM No comments:

Five Economic Reforms Millennials Should Be Fighting For???


The latest internet squabble is over a Rolling Stone article  that advocates 5 things that the "millennials' should be fighting for.

Bad grammar in the title aside, here are the main points of the article: 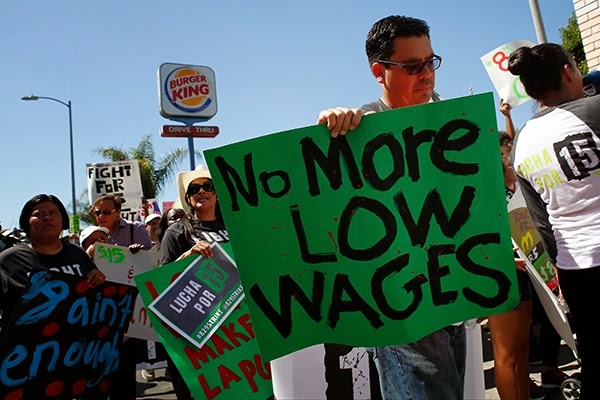 1. Guaranteed Work for Everybody
2. Social Security for All
3. Take Back The Land
4. Make Everything Owned by Everybody
5. A Public Bank in Every State

Before we dissect each point, let's take a quick peek at the overall incoherence of the article.

Point 1 guarantees work for everyone.   Point 2 guarantees an income even if you don't work.  Why do you need guaranteed work if you already have guaranteed income?  Who would choose to work if the alternative was to not work and still get paid?

Each of the points, when examined in detail, betrays the intellectual vapidity and the complete detachment from reality of the author.

1. Guaranteed Work for Everybody
...The easiest and most direct solution is for the government to guarantee that everyone who wants to contribute productively to society is able to earn a decent living in the public sector. There are millions of people who want to work, and there's tons of work that needs doing – it's a no-brainer...
... Imagine a world where people could contribute the skills that inspire them – teaching, tutoring, urban farming, cleaning up the environment, painting murals – rather than telemarketing or whatever other stupid tasks bosses need done to supplement their millions. Sounds nice, doesn't it?

Sound nice?  (the underlying thought behind all liberal ideas, BTW, it 'sounds nice').

The furious envy that drives the author is betrayed by the thought that 'bosses' hire people to do 'stupid tasks' to 'supplement their millions'.  Last time I checked, no one is forced to work in any of these jobs. Businesses exist ONLY to make profit for the owners.  That is their sole purpose, and to demean the tasks that help them create value shows that the author has never run a real business.


2. Social Security for All
What if people didn't have to work to survive? Enter the jaw-droppingly simple idea of a universal basic income, in which the government would just add a sum sufficient for subsistence to everyone's bank account every month.

What if people didn't have to work:?  What if Unicorns were real?  People DO have to work.  The means for our survival does not drop from the sky like mana from heaven .  We must produce the food and shelter we need to survive.   The fact that modern capitalism produces so much surplus wealth that the author has apparently become detached from reality does not change the fact that unless people work there is no food to eat.


3. Take Back The Land
Ever noticed how much landlords blow? They don't really do anything to earn their money. They just claim ownership of buildings and charge people who actually work for a living the majority of our incomes for the privilege of staying in boxes that these owners often didn't build and rarely if ever improve.... In any case, we have to stop letting rich people pretend they privately own what nature provided everyone.

Again, we see the author's total detachment from reality.  Landlord's actually do provide a valuable service.  They provide capital to allow people (like the author) who lack capital, to live in housing they could never build themselves.

And nature did not provide apartments.  People did.  Search the world and you will not find an apartment building that sprung forth from the bosom of nature.   People saved money and built the building.  They improved the land.  Absent property rights in land, these improvements do not happen and everyone is living in a cardboard hut.


4. Make Everything Owned by Everybody
... Just buy up their stocks and bonds. When the government does that, it's called a sovereign wealth fund. Think of it like a big investment fund that buys up assets from the private sector and pays dividends to all permanent U.S. residents in the form of a universal basic income.

This idea assumes that the government creates value when it prints money.  This is absolutely not the case.  A dollar is a claim on the work of other people.  I trade you a dollar for the scarf you made, or you give me a dollar in exchange for an hour of my labor.

The money the government has comes from the taxpayers, and the 1% pay the vast majority of the taxes.

Taking peoples assets away and giving them back a claim on their own future labor is not progress, it is theft.


5. A Public Bank in Every State
The whole point of a finance sector is supposed to be collecting the surplus that the whole economy has worked to produce, and channeling that surplus wealth toward its most socially valuable uses. It is difficult to overstate how completely awful our finance sector has been at accomplishing that basic goal. Let's try to change that by allowing state governments into the banking game.

No, banks do not exist to channel wealth to 'socially valuable uses'.  They exist to make profit for the owners.
One reason that our finance sector has failed to meet that 'goal' is that it is not trying to accomplish that goal.

And allowing the government into banking will have the same degree of success that the government has had in backing green energy companies.   Every one of those investments has failed spectacularly, with Solyndra being the $500MM poster child for how badly the government invests.

Imagine if the entire world were run by the people that invested in Solyndra?

In summary, the author has a bunch of half baked ideas that don't stand a chance of succeeding in the real world.

And for the record, the alternative to low wages is not higher wages, it is no wages at all.

Posted by Kaffeesatz at 10:26 AM No comments: