Reparations: An Idea the Nazi's Would Love!

Insane ideas float around the radical Left for years before they become mainstream Democrat talking points.  The latest absurd notion is Reparations. 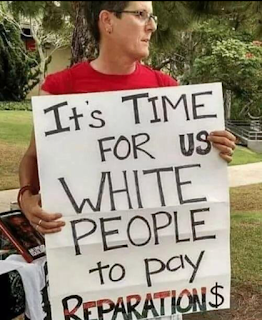 Economist Robert Browne wrote the ultimate goal from reparations should be to "restore the black community to the economic position it would have if it had not been subjected to slavery and discrimination".

The reparations proposals are long on posturing and short on specifics.  They make grandiose claims of oppression, but never really specify the mechanics of how reparations would work.

The actual victims of slavery are long dead, and the slave owners have also passed on.  So to whom do we give reparations?  Who pays?

Does Barack Obama pay?  He’s half white, after all.  Or does Obama get paid?  His father was black and wasn’t even American.   What about Tiger Woods?  He’s half Asian, and his father is black.

What counts as ‘black’, anyway?   People are dragging Kamala Harris on Twitter because she is half Indian and half Jamaican.  What category does she fall into?

Who pays?  None of my ancestors were even in the US until the 1880’s.  Obama’s mother’s family has been here since 1850 or so, making him far guiltier of being enriched by slavery than my family.

This whole idea is insane, and there is no way to execute it without creating massive injustice in the current era as a way to make amends for misdeeds of our long dead past.

Perhaps we should adopt the policies of the world’s leading authorities on matters racial.  The Nazi’s had the ‘one drop’ of Jewish blood standard, and perhaps the Left will leverage that intellectual framework.  That will surely help calm racial tensions!