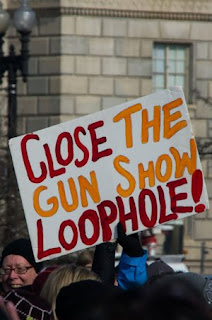 Sure, they call it 'closing the gun show loophole', or 'mandatory background checks', but in reality, it is a call for full gun registration.

Any law that bans private sales of firearms will necessarily require gun registration.  Let's assume that I own over 20 firearms.  How will the police be able to tell which of them I bought with a background check and which I did not?   If there is no list of 'pre-background check' firearms, I can simply claim I bought the guns prior to the ban.

Possession would also have to be deemed the equivalent of ownership, as it is currently for the prohibitions against felons carrying a gun.  If I have gun in my possession and the police demand to see evidence I passed a background check, I could simply claim it is not my gun, I am simply 'holding it for a friend'.

In order for such a law to work, every firearm in the country would need to be registered with the government.  The government can then check the list of legal guns against what I have in my possession, and charge me with a crime for any discrepancies.

This is an insanely dangerous and likely un-constitutional law.

It would instantly turn tens of millions of law abiding gun owners into felons, as registration rates would fall well short of actual ownership.